Here is the best collection of Steve Jobs quotes that will motivate you to do better in your life. Steve Jobs was one of the most influential and iconic businessmen of the last century. He founded Apple Computer (now Apple Inc.), back in 1976, and at the time of his death, he was worth an estimated $8.3 billion.

Steve Jobs was a man of many words. So much, in fact, that his thoughts and words could fill up several books without any trouble at all. His story is one of the most inspirational success stories of our generation.

But you don’t need to read anything. We rounded up a few of his most famous quotes – some of which you’ve probably read, but many you’ve likely not read before.

Great things in business are never done by one person. They’re done by a team of people.

Everyone here has the sense that right now is one of those moments when we are influencing the future.

Our goal is to make the best devices in the world, not to be the biggest.

Follow your heart and intuition. They somehow already know what you truly want to become. Everything else is secondary.

Your time is limited, so don’t waste it living someone else’s life. 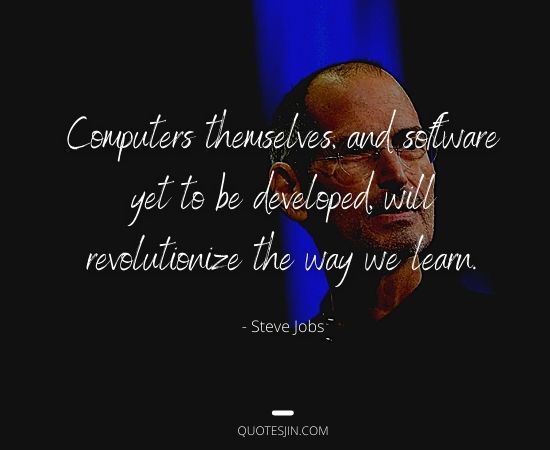 Computers themselves, and software yet to be developed, will revolutionize the way we learn.

Being the richest man in the cemetery doesn’t matter to me. Going to bed at night saying we’ve done something wonderful, that’s what matters to me.

You can’t just ask customers what they want and then try to give that to them. By the time you get it built, they’ll want something new.

No one wants to die. Even people who want to go to heaven don’t want to die to get there. And yet death is the destination we all share.

My favorite things in life don’t cost any money. It’s really clear that the most precious resource we all have is time. 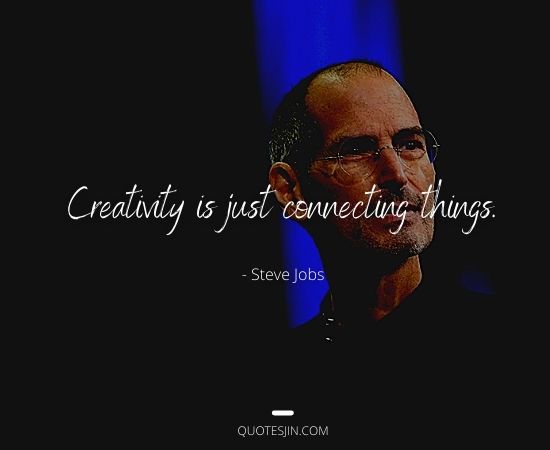 Have the courage to follow your heart and intuition. They somehow know what you truly want to become.

I believe life is an intelligent thing: that things aren’t random.

We don’t get a chance to do that many things, and everyone should be really excellent. Because this is our life. Life is brief, and then you die, you know? And we’ve all chosen to do this with our lives. So, it better be damn good. It better be worth it.

Let’s go invent tomorrow rather than worrying about what happened yesterday.

You have to be burning with an idea, or a problem, or a wrong that you want to right. If you’re not passionate enough from the start, you’ll never stick it out.

Details matter, it’s worth waiting to get it right.

The only way to do great work is to love what you do.

I do not adopt softness towards others because I want to make them better.

Older people sit down and ask, ‘What is it?’ but the boy asks, ‘What can I do with it?’

In the broadest context, the goal is to seek enlightenment – however you define it.

If you’re gonna make connections which are innovative… you have to not have the same bag of experiences as everyone else does.

Get closer than ever to your customers. So close that you tell them what they need well before they realize it themselves. 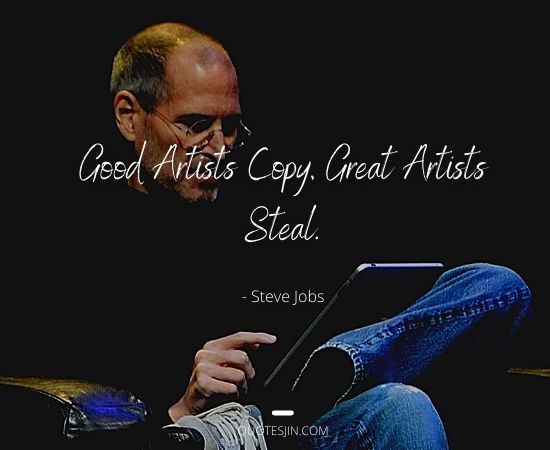 I’m an optimist in the sense that I believe humans are noble and honorable, and some of them are really smart. I have a very optimistic view of individuals.

The people who are crazy enough to think they can change the world are the ones who do.

I don’t care about being right. I care about success and doing the right thing.

I’m convinced that to give away a dollar effectively is harder than to make a dollar.

Things don’t have to change the world to be important.

Design is a funny word. Some people think design means how it looks. But of course, if you dig deeper, it’s really how it works.

Don’t let the noise of others’ opinions drown out your own inner voice.

Remembering that you are going to die is the best way I know to avoid the trap of thinking you have something to lose. You are already naked. There is no reason not to follow your heart. – Steve Jobs

Innovation distinguishes between a leader and a follower.

You can’t connect the dots looking forward; you can only connect them looking backward. So you have to trust that the dots will somehow connect in your future.

Technology is nothing. What’s important is that you have a faith in people, that they’re basically good and smart, and if you give them tools, they’ll do wonderful things with them.

It’s not the tools that you have faith in – tools are just tools. They work, or they don’t work. It’s people you have faith in or not. Yeah, sure, I’m still optimistic I mean, I get pessimistic sometimes but not for long.

I know what it’s like to have your private life painted in the worst possible light in front of a lot of people. I’ve learned what it’s like for everyone you meet after that to sort of have preconceptions about you… It’s been a character-building experience. 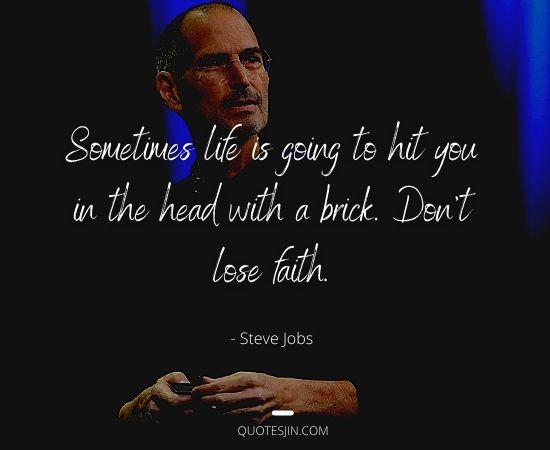 Sometimes life is going to hit you in the head with a brick. Don’t lose faith.

Your work is going to fill a large part of your life, and the only way to be truly satisfied is to do what you believe is great work. And the only way to do great work is to love what you do. If you haven’t found it yet, keep looking. Don’t settle. As with all matters of the heart, you’ll know when you find it.

We’re just enthusiastic about what we do.

Every one of us is a walking set of contradictions. The great among us are no different, except that their contradictions tend to run to extremes.

I want to put a ding in the universe.

Be a yardstick of quality. Some people aren’t used to an environment where excellence is expected.

For you to sleep well at night, the aesthetic, the quality, has to be carried all the way through.

Focusing is about saying no. And you’ve got to say no, no, no. When you say no, you piss off people.

Japan’s very interesting. Some people think it copies things. I don’t think that anymore. I think what they do is reinvent things. They will get something that’s already been invented and study it until they thoroughly understand it. In some cases, they understand it better than the original inventor.

I’m convinced that about half of what separates successful entrepreneurs from the non-successful ones is pure perseverance.

I don’t mind being wrong, and I’ll admit that I’m wrong a lot. It doesn’t really matter to me too much. What matters to me is that we do the right thing.

Simple can be harder than complex: You have to work hard to get your thinking clean to make it simple. But it’s worth it in the end because once you get there, you can move mountains.

The reason I went back to Apple is that I feel like the world would be a better place with Apple in it than not. And it’s hard to imagine the world without Apple now.

Remembering that I’ll be dead soon is the most important tool I’ve ever encountered to help me make the big choices in life.

You have to trust in something – your gut, destiny, life, karma, whatever. This approach has never let me down, and it has made all the difference in my life.

Sometimes when you innovate, you make mistakes. It is best to admit them quickly, and get on with improving your other innovations.

We hire people who want to make the best things in the world. 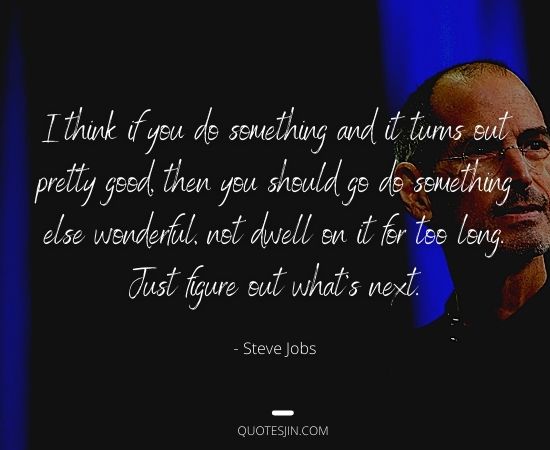 I think if you do something and it turns out pretty good, then you should go do something else wonderful, not dwell on it for too long. Just figure out what’s next.

We figured even if we crash and burn, and lose everything, the experience will have been worth ten times the cost.

Quality is more important than quantity. One home run is much better than two doubles.

Now, as you graduate to begin anew, I wish that for you, ‘Stay hungry, stay foolish.’

There is a tremendous amount of craftsmanship between a great idea and a great product.

The smallest company in the world can look as large as the largest company on the web.

The greatest thing is when you do put your heart and soul into something over an extended period of time, and it is worth it.

It’s really hard to design products by focus groups. A lot of times, people don’t know what they want until you show it to them.

People judge you on your performance, so focus on the outcome.

That’s been one of my mantras – focus and simplicity. Simple can be harder than complex; you have to work hard to get your thinking clean to make it simple.

What is Apple, after all? Apple is about people who think ‘outside the box,’ people who want to use computers to help them change the world, to help them create things that make a difference, and not just to get a job done.

The doers are the major thinkers. The people that really create the things that change this industry are both the thinker and doer in one person.

I always advise people – Don’t wait! Do something when you are young when you have nothing to lose, and keep that in mind.

You should never start a company with the goal of getting rich. Your goal should be making something you believe in and making a company that will last.

Your time is limited, so don’t waste it living someone else’s life. Don’t be trapped by dogma – which is living with the results of other people’s thinking. Don’t let the noise of others’ opinions drown out your own inner voice. And most important, have the courage to follow your heart and intuition.