Here are some inspiring self-respect quotes that will inspire you to love yourself more.

Self-respect is the opinion you have of yourself, or, in other words, your self-image. Self-respect is not about being arrogant or conceited. In fact, it is about having a healthy and realistic self-image – one that represents who you are.

Healthy self-respect has a number of benefits: it can help you focus on your strengths and achievements; it can help you work towards your goals rather than giving up; it offers motivation for change and improvement.

Self-respecting yourself should be an ongoing process because our opinions of ourselves change over time. Here are some quotes to help you build your self-esteem from today on: 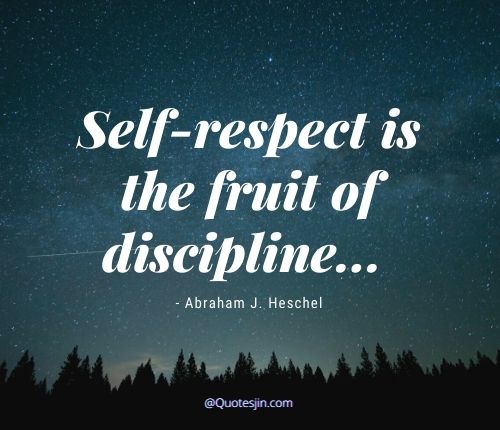 Self-respect is the fruit of discipline… – Abraham J. Heschel 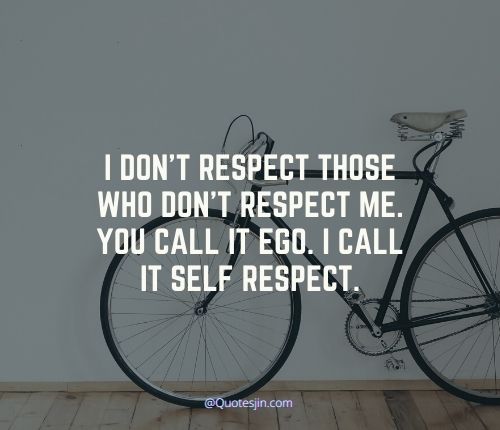 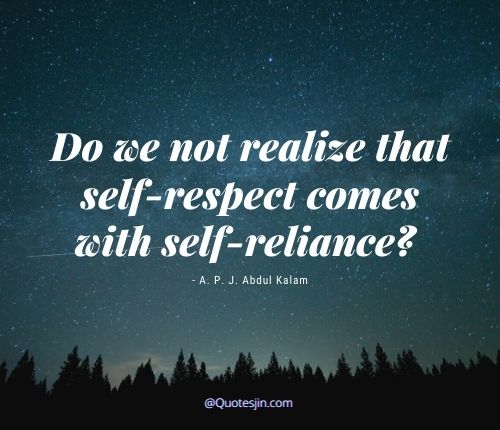 Do we not realize that self-respect comes with self-reliance? – A. P. J. Abdul Kalam 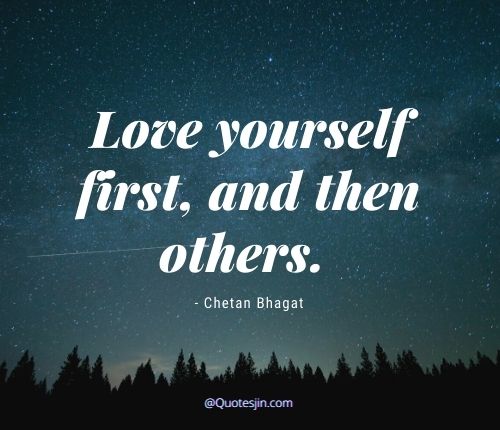 Love yourself first, and then others. – Chetan Bhagat 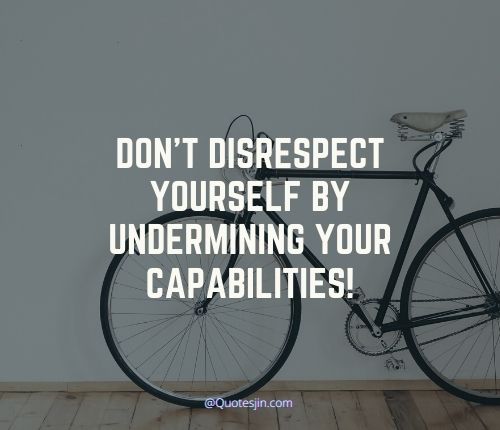 Don’t disrespect yourself by undermining your capabilities! 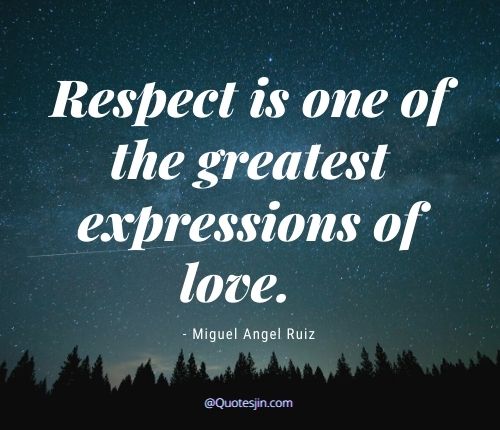 Respect is one of the greatest expressions of love.  – Miguel Angel Ruiz 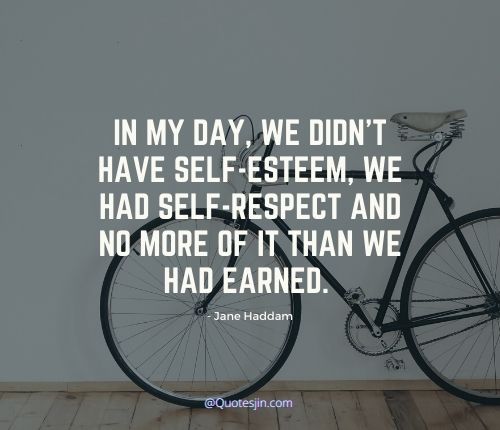 In my day, we didn’t have self-esteem, we had self-respect and no more of it than we had earned. – Jane Haddam 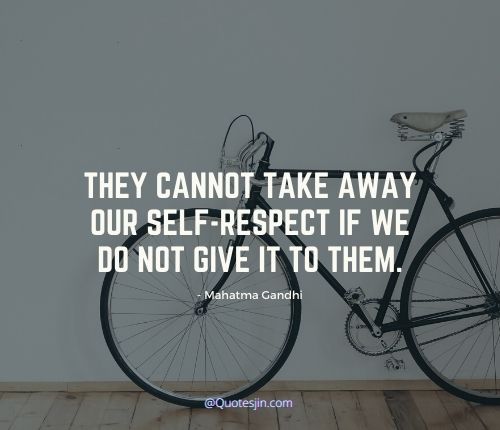 They cannot take away our self-respect if we do not give it to them. – Mahatma Gandhi 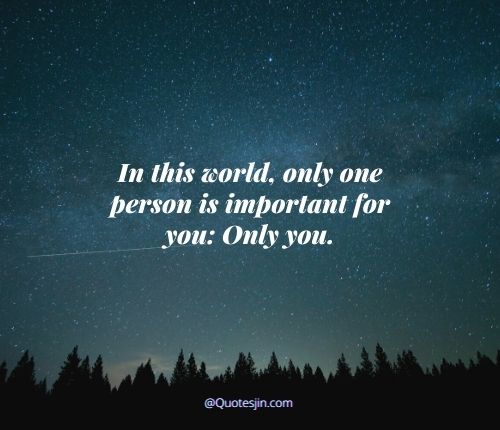 In this world, only one person is important for you: Only you. 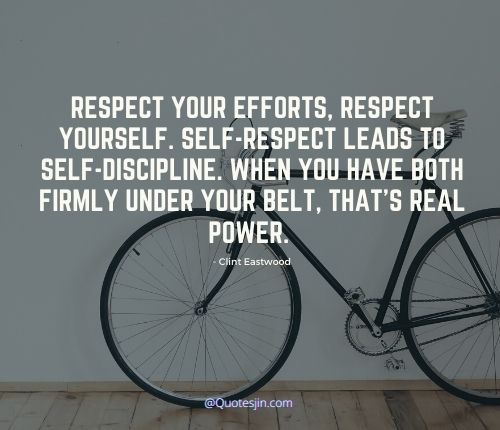 Respect your efforts, respect yourself. Self-respect leads to self-discipline. When you have both firmly under your belt, that’s real power. – Clint Eastwood

Most Famous Self Respect Quotes 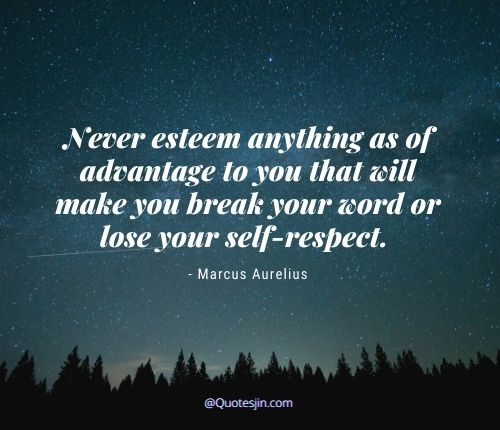 Never esteem anything as of advantage to you that will make you break your word or lose your self-respect. – Marcus Aurelius 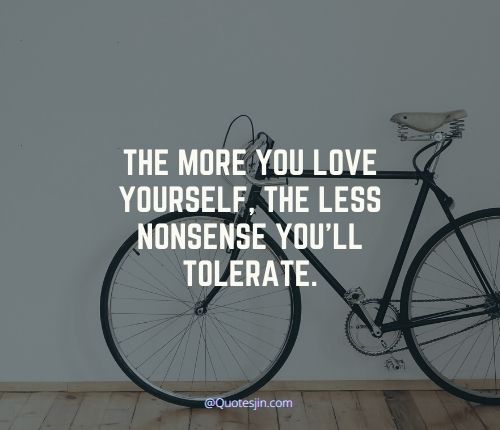 The more you love yourself, the less nonsense you’ll tolerate. 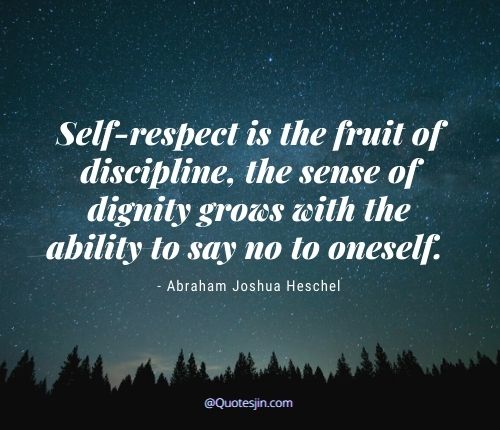 Self-respect is the fruit of discipline, the sense of dignity grows with the ability to say no to oneself. – Abraham Joshua Heschel 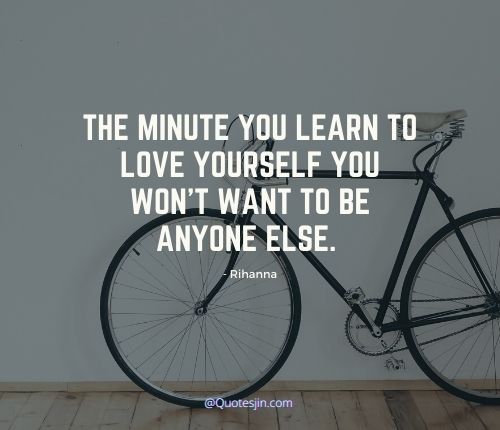 The minute you learn to love yourself you won’t want to be anyone else. – Rihanna 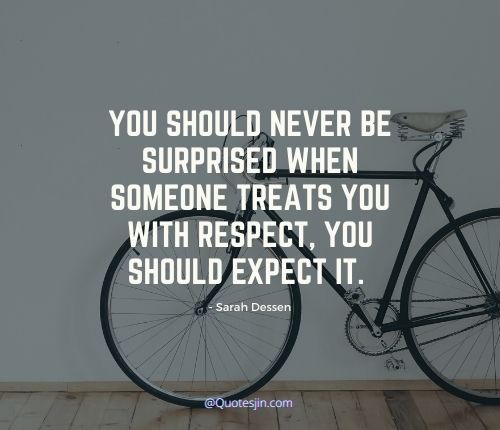 You should never be surprised when someone treats you with respect, you should expect it. – Sarah Dessen

Do not compare yourself to others. If you do so, you are insulting yourself. – Adolf Hitler 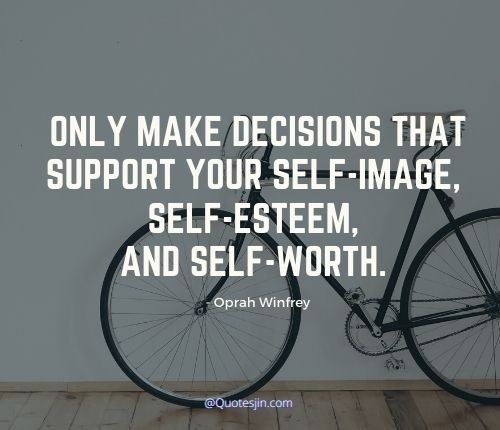 Only make decisions that support your self-image, self-esteem, and self-worth. – Oprah Winfrey 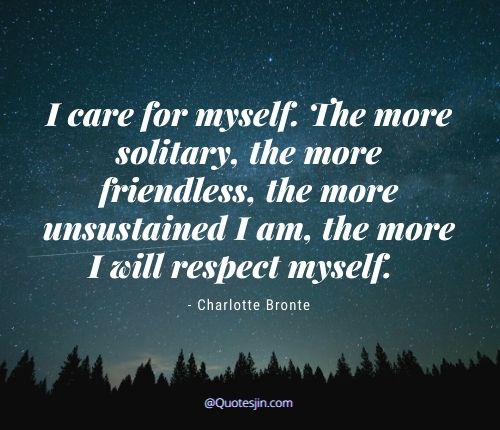 I care for myself. The more solitary, the more friendless, the more unsustained I am, the more I will respect myself. – Charlotte Bronte

Quotes on Self-Respect and Dignity 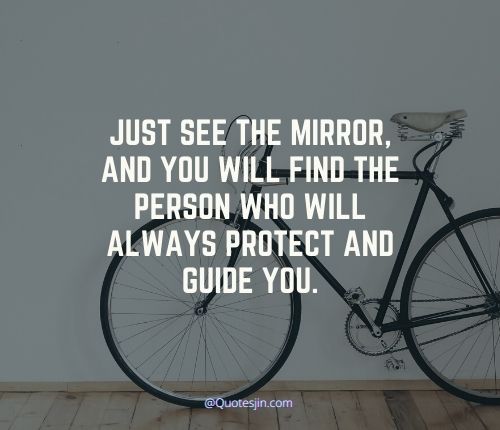 Just see the mirror, and you will find the person who will always protect and guide you.

I never work just to work. It’s some combination of laziness and self-respect. – Harold Ramis 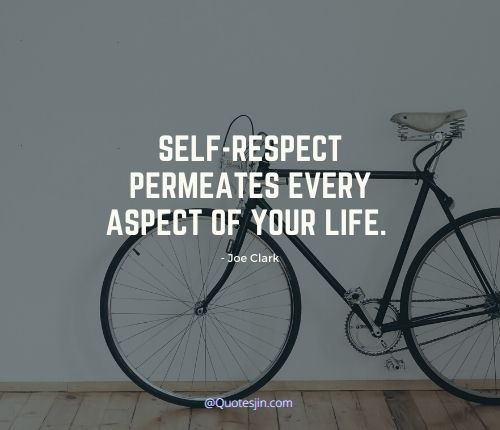 Self-respect permeates every aspect of your life. – Joe Clark 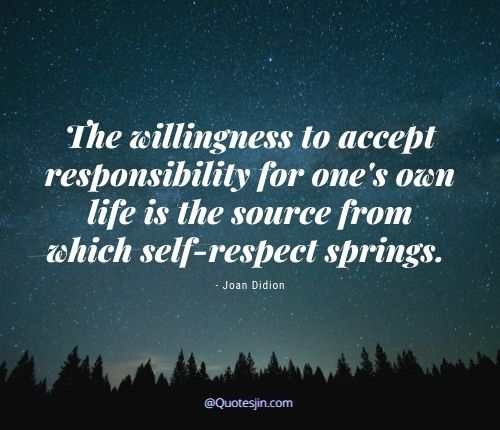 The willingness to accept responsibility for one’s own life is the source from which self-respect springs. – Joan Didion 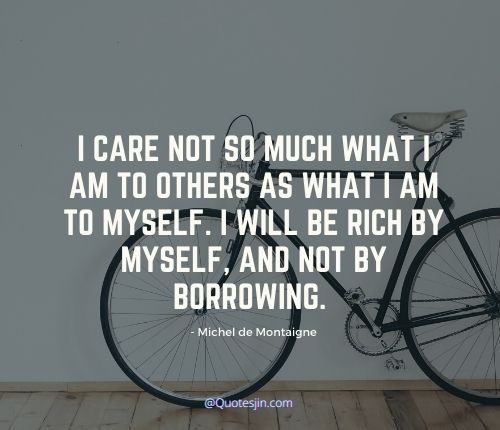 I care not so much what I am to others as what I am to myself. I will be rich by myself, and not by borrowing. – Michel de Montaigne 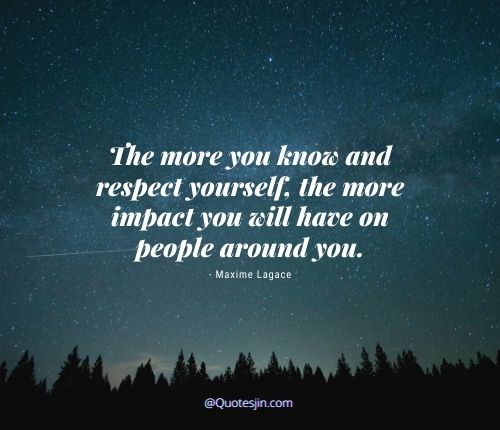 The more you know and respect yourself, the more impact you will have on people around you. 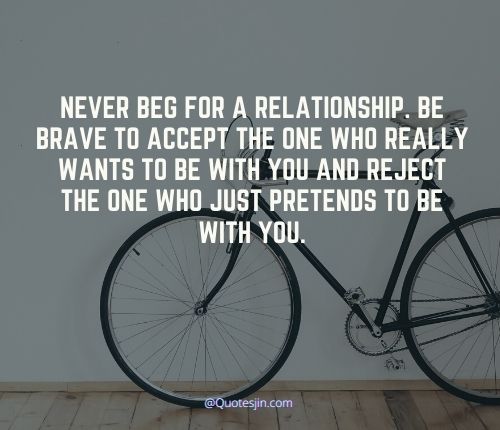 If we lose love and self-respect for each other, this is how we finally die. – Maya Angelou

Make a choice: Continue living your life feeling muddled in this abyss of self-misunderstanding, or you find your identity independent of it. – Meghan Markle 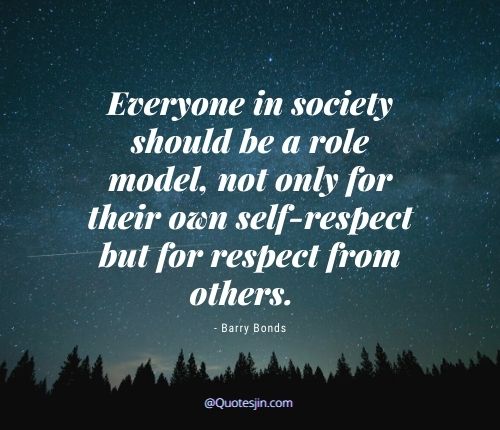 Everyone in society should be a role model, not only for their own self-respect but for respect from others. – Barry Bonds 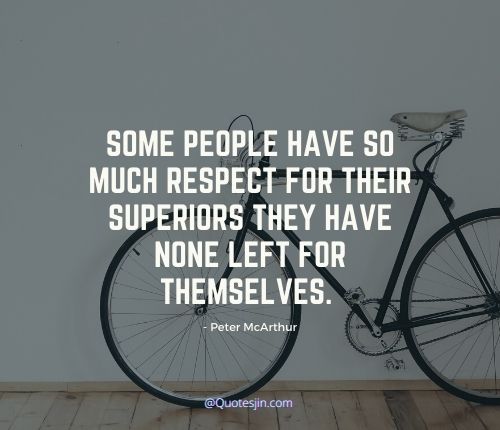 Some people have so much respect for their superiors they have none left for themselves. – Peter McArthur 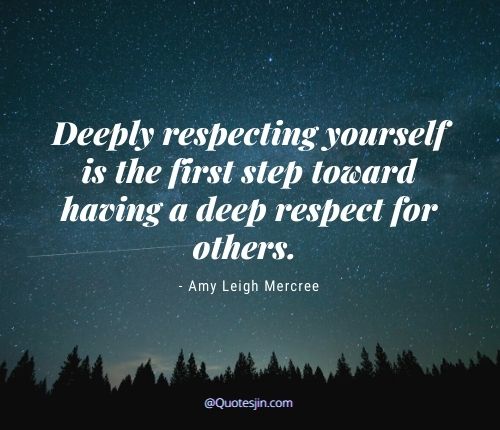 Deeply respecting yourself is the first step toward having a deep respect for others. – Amy Leigh Mercree

Ego is negative but self-respect is positive.

Respect is not imposed nor begged. It’s earned and offered.

Don’t lower your standards for anyone or anything. Self respect is everything.

You can’t force someone to respect you but you can refuse to be disrespected.

The most painful thing is losing yourself in the process of loving someone too much, and forgetting that you are special too.

Dare to love yourself as if you were a rainbow with gold at both ends. – Aberjhani

Better to die on your feet than live on your knees.

The greatest thing in the word is to know how to belong to oneself.

Love yourself enough to surround yourself with people who respect you.

Once you feel you are avoided by someone, never disturb them again.

You punch me, I punch back. I do not believe it’s good for one’s self-respect to be a punching bag. – Ed Koch

It is better to look ahead and prepare than to look back and regret. – Jackie Joyner Kersee

Self-care is never a selfish act it is simply good stewardship of the only gift I have, the gift I was put on earth to offer to others. – Parker Palmer

To free us from the expectations of others, to give us back to ourselves – there lies the great, singular power of self-respect. – Joan Didion

Don’t lose your self-respect for your feelings. – Priyanshu Singh

There is no respect for others without humility in one’s self.

It’s one of the greatest gifts you can give to yourself.

It takes courage to live your truth but, what you get in return is self-respect.

Removing people from your life is a symbol of self-respect.

Self-respect is the courage to leave the table when things go beyond the limit!

I cannot conceive of a greater loss than the loss of one’s self-respect.

They should have some standards. It’s a part of having self respect.

Show respect to all people, but grovel to none.

Self-respect is the cornerstone of all virtue. – John Herschel

Respect yourself and others will respect you. – Confucius

A man can stand a lot as long as he can stand himself. – Axel Munthe

Teach People How to treat you.

Quotes on Self Respect

You yourself, as much as anybody in the entire universe, deserve your love and affection. – Buddha

You cannot give respect if you don’t have it, respect yourself and respecting others will automatic.

Look yourself in the mirror and wish you could date yourself!

When you say yes to others make sure you are not saying no to yourself.

If we lose our love and self-respect and respect for each other, this is how we will finally die. – Maya Angelou

The great thing in the world is not so much to seek happiness as to earn peace and self-respect. – Thomas Huxely

The respect you show to others is an immediate reflection of your own self-respect. – Alex Elle

If you do not respect your own wishes, no one else will. You will simply attract people who disrespect you as much as you do. – Vironika Tugaleva

You have been criticizing yourself for years and it hasn’t worked. Try approving of yourself and see what happens. – Louise Hay

Maturity is learning to gracefully walk away from situations that threaten your peace of mind, self-respect, values, morals, or self worth.

Sometimes you have to try not to care, no matter how much you do, because sometimes you can mean nothing to someone who means so much to you. It’s not pride, it is self- respect.

The willingness to accept responsibility for one’s own life is the source from which self-respect springs.

Learn to walk away from anything that threatens your peace of mind, self-worth, and self-respect.

Selflove is connected with self-acceptance and self-caring; it is a Healing Journey to find your happiness and yourself.

Worship is a sixth sense of a (believer) to serve, respect, honor, do the word of your master, with faithfulness, commitment, sacrifice, obedience, and self-drive. – Clous

Self-love, self-respect, self-worth….there is a reason they all start with ‘self.’ You cannot find them in anyone else. – Liz

Trust yourself. Create the kind of self that you will be happy to live with all your life. – Golda Meir