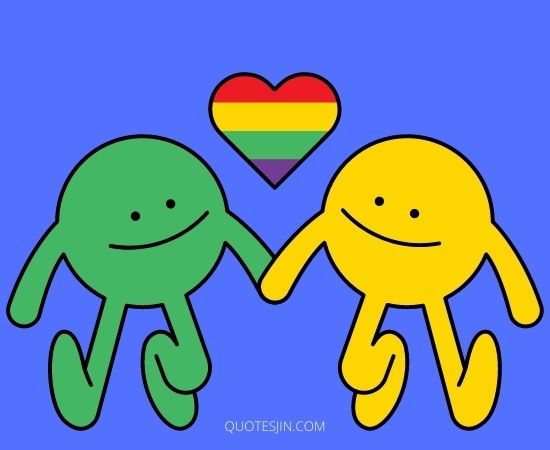 Quotes about humanity are a reminder that even though people can be cruel and heartless at times, they are also capable of great compassion, courage, and selflessness. These quotes remind us that we all have the potential to be kind, caring, and loving people. They remind us of the good in humanity and inspire us to do our best to make the world a better place.

Humanity has been a source of inspiration and empathy since the beginning. The idea of what it means to be human is often explored through literature and philosophy – and even in quotes.

Though we know there is never one singular opinion on what it means to be human, we’ve gathered up the most memorable quotes below to try and offer some insight into what humanity can mean for different people. 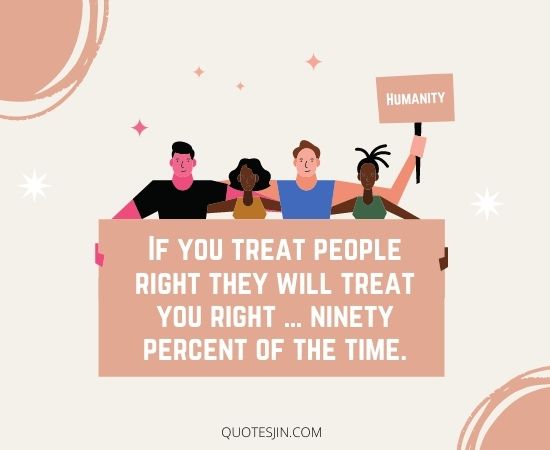 If you treat people right they will treat you right … ninety percent of the time. – Franklin D. Roosevelt

If we have no peace, it is because we have forgotten that we belong to each other. – Mother Teresa

All you need to do is help one person, expecting nothing in return. To me, that is a humanitarian. – Rihanna

In the faces of men and women, I see God. – Walt Whitman

You must not lose faith in humanity. – Mahatma Gandhi

Politeness is the flower of humanity. – Joseph Joubert

I choose acceptance and compassion toward all humanity. – Jonathan Lockwood Huie

People have become educated but have not become human. – Abdul Sattar Edhi

Being human is given. But keeping our humanity is a choice. – Anonymous

The purpose of human life is to serve, and to show compassion and the will to help others. – Albert Schweitzer

Be a good human being, a warm hearted, affectionate person. That is my fundamental belief. – Dalai Lama

Be kind to all creatures. – Buddha

Love and compassion are necessities, not luxuries. Without them humanity cannot survive. – Dalai Lama 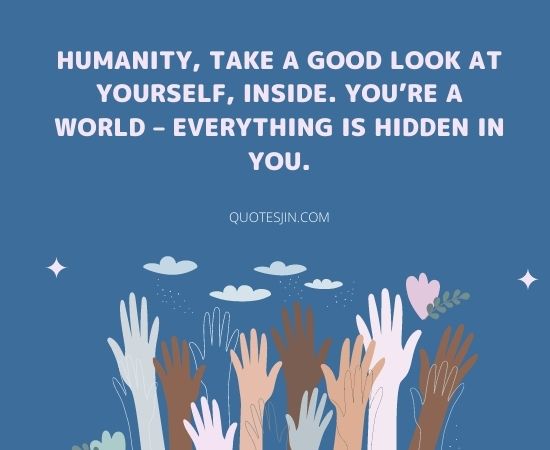 Humanity, take a good look at yourself, inside. You’re a world – everything is hidden in you. – Hildegard of Bingen

Let’s not lose hope in humanity, instead live to help others. We can make a difference. – Anonymous

We think too much and feel too little. More than machinery, we need humanity; more than cleverness, we need kindness and gentleness. Without these qualities, life will be violent and all will be lost. – Charles Chaplin

Benevolence is the characteristic element of humanity. – Confucius

How many disasters do we need to unite humanity. – Loesje

We are all connected. When one arm or foot is poisoned, the whole body becomes infected. – Suzy Kassem

Who so lives for humanity must be content to lose himself. – Octavius Brooks Frothingham

By serving humanity, I automatically serve myself. – Vironika Tugaleva

Humanity’s next state is rising above ourselves for the sake of our common unity. – Anonymous 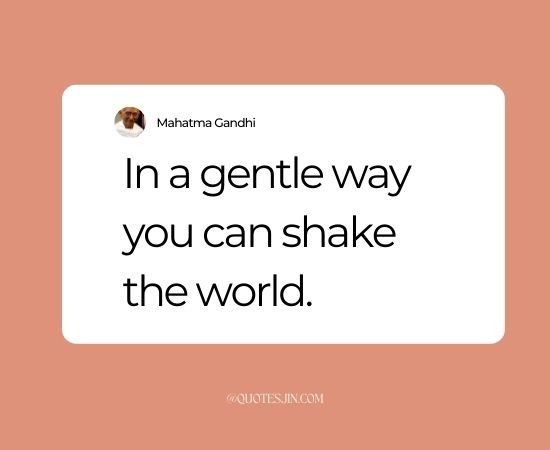 In a gentle way you can shake the world. – Mahatma Gandhi

Moral courage is the highest expression of humanity. – Ralph Nader

My work is about helping humanity. – Agnes Denes

Here I am. I claim my humanity with no fear and no limits. Here I am. – Oprah Winfrey

All labor that uplifts humanity has dignity and importance and should be undertaken with painstaking excellence. – Martin Luther King

Those who teach the most about humanity, aren’t always humans. – Donald L. Hicks

Our human compassion binds us the one to the other – not in pity or patronizingly but as human beings who have learnt how to turn our common suffering into hope for the future. – Nelson Mandela

I hope that people will finally come to realize that there is only one ‘race’ – the human race – and that we are all members of it. – Margaret Atwood

Let us have but one end in view, the welfare of humanity; and let us put aside all selfishness in consideration of language, nationality, and religion. – John Arnos Comenius

Quotes About Humanity And Peace

Who are we as human beings if we ignore the suffering of others? – Anonymous

We are all cells in the same body of humanity. – Anonymous

To deny people their human rights is to challenge their very humanity. – Nelson Mandela

The sole meaning of life is to serve humanity. – Leo Tolstoy

What is tolerance? It is the consequence of humanity. We are all formed of frailty and error; let us pardon reciprocally each other’s folly – that is the first law of nature. – Voltaire

One way or another, we all have to find what best fosters the flowering of our humanity in this contemporary life, and dedicate ourselves to that. – Joseph Campbell

Love is the crowning grace of humanity, the holiest right of the soul, the golden link which binds us to duty and truth, the redeeming principle that chiefly reconciles the heart to life. – Anonymous

When freedom does not have a purpose, when it does not wish to know anything about the rule of law engraved in the hearts of men and women, when it does not listen to the voice of conscience, it turns against humanity and society. – Pope John Paul II

During bad circumstances, which is the human inheritance, you must decide not to be reduced. You have your humanity, and you must not allow anything to reduce that. We are obliged to know we are global citizens. Disasters remind us we are world citizens, whether we like it or not. – Maya Angelou

Quotes About Humanity And Kindness

My mission in life is not only to enjoy life, but to help others to feel the joy of life. – Debasish Mridha

To my conscience, Humanity is the Mother of all religions. Be the Human and Being Human raise the standard of Humanity. – Kamal Haasan

Humanity is about raising up each other for good. – Zaman Ali

Humanity’s true moral test, its fundamental test consists of its attitude towards those who are at its mercy: animals. – Milan Kundera

World is full of nice people, if u cannot find one be one ! – Chetan Bhagat 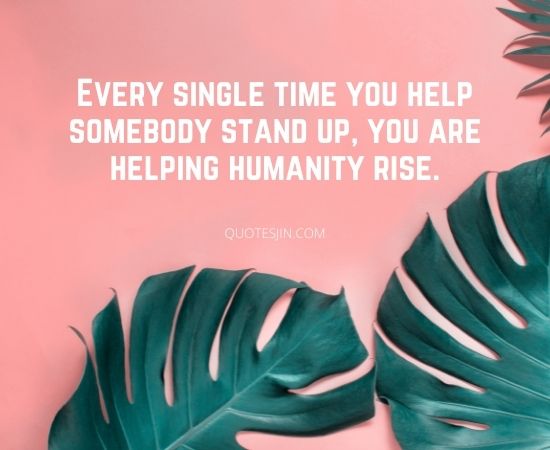 Every single time you help somebody stand up, you are helping humanity rise. – Steve Maraboli

An individual has not started living until he can rise above the narrow confines of his individualistic concerns to the broader concerns of all humanity. – Martin Luther King, Jr.

We people, when we feel pain, it is an indication that we are alive. But when we feel the pain that does not belong to us, but to others – it is then that we know, we are humans. – Anonymous

Our society needs more heroes who are scientists, researchers, and engineers. We need to celebrate and reward the people who cure diseases, expand our understanding of humanity and work to improve people’s lives. – Mark Zuckerberg

I love Humanity but I hate humans. – Albert Einstein

There is always more misery among the lower classes than there is humanity in the higher. – Victor Hugo

Being a Humanist means trying to behave decently without expectation of rewards or punishment after you are dead. – Kurt Vonnegut

Human as an intellectual being needs answers about the existence for the purpose of knowing the way to live. – Zaman Ali

Progress is the attraction that moves humanity. – Marcus Garvey

My country is the world, and my religion is to do good. – Thomas Paine

Since we live in this world, we have to do our best for this world. – Aung San Suu Kyi

Never discourage anyone who continually makes progress, no matter how slow. – Plato

Empathy, humanity and support for each other is more important than revenue, than growth. – Eric Yuan

Earth provides enough to satisfy every man’s need, but not every man’s greed. – Mahatma Gandhi

The more we take, the less there is for future generations. – Phil Kingston

The next evolutionary step for humankind is to move from man to kind. – Unknown

No religion is higher than humanity. – Abdul Sattar Edhi

In recognizing the humanity of our fellow beings, we pay ourselves the highest tribute. – Thurgood Marshall

Humanity is so much more than the sum of humans. – Unknown

Kindness is the best form of humanity. – Doris Lee

All I have is a sense of duty toward all people and an attachment to those with whom I have become intimate. – Albert Einstein

If you judge people, you have no time to love them. – Mother Teresa

Each of us must work for his own improvement, and at the same time share a general responsibility for all humanity. – Marie Curie

You must never be fearful about what you are doing when it is right. – Rosa Parks

I’m not concerned with your liking or disliking me… All I ask is that you respect me as a human being. – Jackie Robinson

The pacifist is as surely a traitor to his country and to humanity as is the most brutal wrongdoer. – Theodore Roosevelt

Great thoughts speak only to the thoughtful mind, but great actions speak to all mankind. – Theodore Roosevelt

I don’t think of all the misery, but of the beauty that still remains. – Anne Frank

We are very, very small, but we are profoundly capable of very, very big things. – Stephen Hawking

One book, one pen, one child, and one teacher can change the world. – Malala Yousafzai

Humanity has only scratched the surface of its real potential. – Peace Pilgrim

This is my creed: Happiness is the only good; reason the only torch; justice the only worship, humanity the only religion, and love the only priest. – Robert Green Ingersoll

To think ill of mankind and not wish ill to them, is perhaps the highest wisdom and virtue. – William Hazlitt

There is a universal respect and even admiration for those who are humble and simple by nature, and who have absolute confidence in all human beings irrespective of their social status. – Nelson Mandela

Difference between religions and humanity. Religions tell you to spend thousands of dollars on pilgrimage and distribution of holy books, while humanity tells you to spend that money on your neighbor who is starving to death, and on people living in poverty. – Anonymous

There are many quotes out there about humanity, both positive and negative. This article has given you a glimpse into some very powerful quotes by famous people throughout history. When in doubt, think about these quotes when you find yourself struggling with your own humanity.