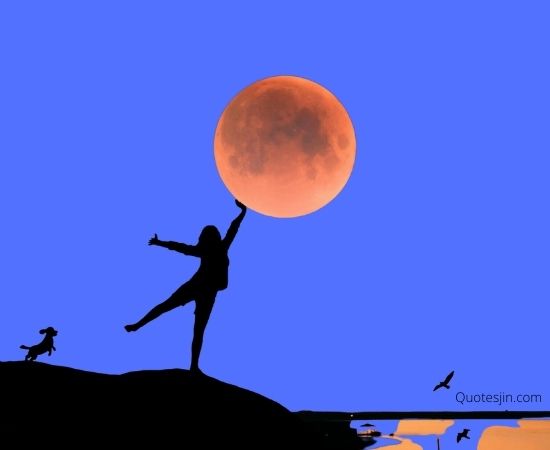 Moon quotes are filled with symbolism and beauty. The moon has been a source of inspiration and beauty for cultures all over the world for centuries. For many, the symbol of the moon is a reminder of life’s ever-changing nature. It shines down on us with its light at night when we feel small and alone.

People have thought of it as something more than just a white orb in the sky, but they’ve used the moon to represent their souls, emotions, and even spirituality. Here are the best collection of moon quotes for inspiration. 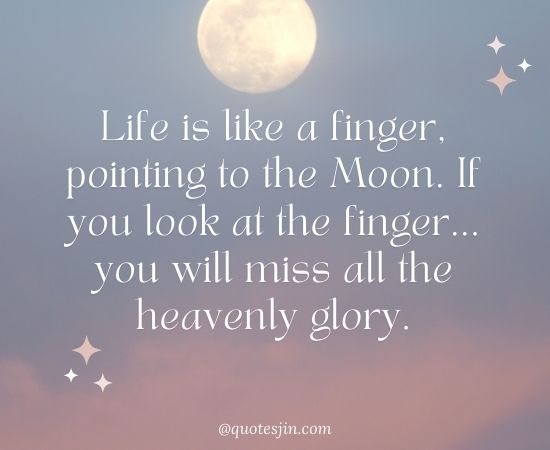 Life is like a finger, pointing to the Moon. If you look at the finger… you will miss all the heavenly glory.
– Unknown 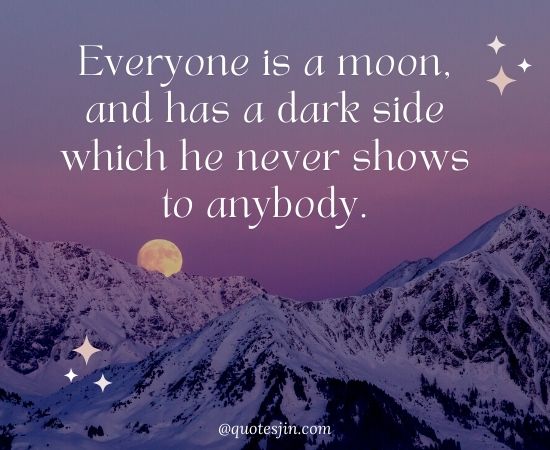 Everyone is a moon, and has a dark side which he never shows to anybody.
– Mark Twain 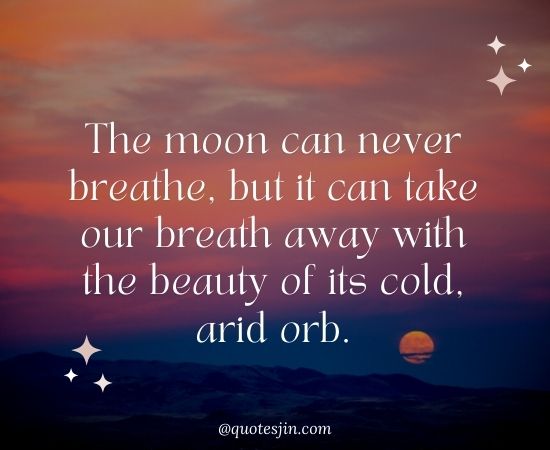 The moon can never breathe, but it can take our breath away with the beauty of its cold, arid orb.
– Munia Khan 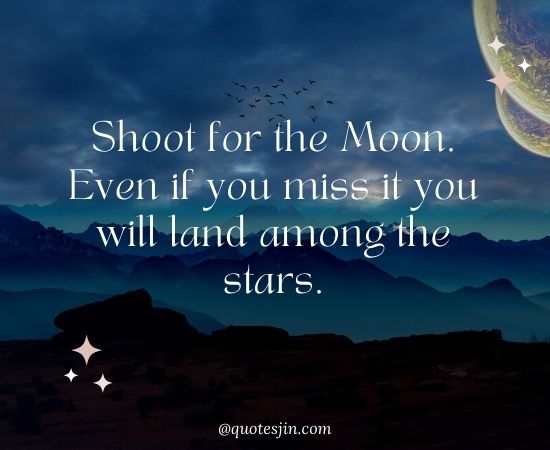 Shoot for the Moon. Even if you miss it you will land among the stars.
– Les Brown 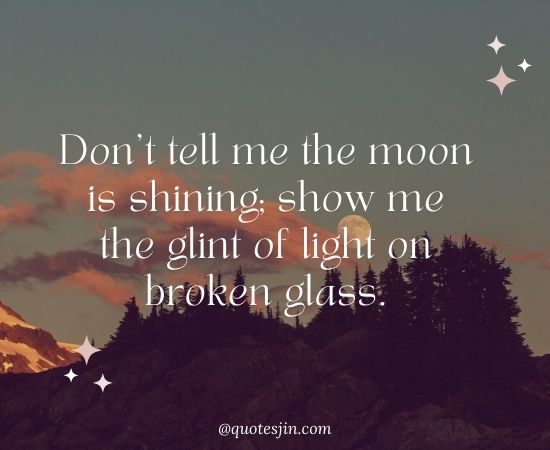 Don’t tell me the moon is shining; show me the glint of light on broken glass.
– Anton Chekhov 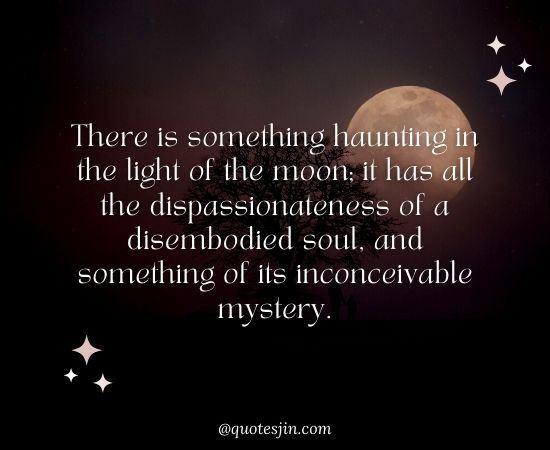 There is something haunting in the light of the moon; it has all the dispassionateness of a disembodied soul, and something of its inconceivable mystery.
– Joseph Conrad 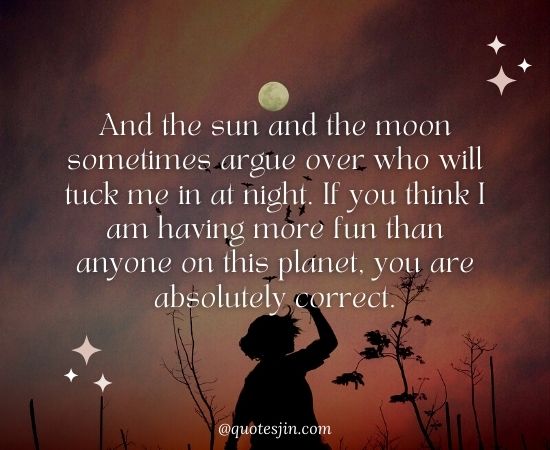 And the sun and the moon sometimes argue over who will tuck me in at night. If you think I am having more fun than anyone on this planet, you are absolutely correct.
– Hafiz 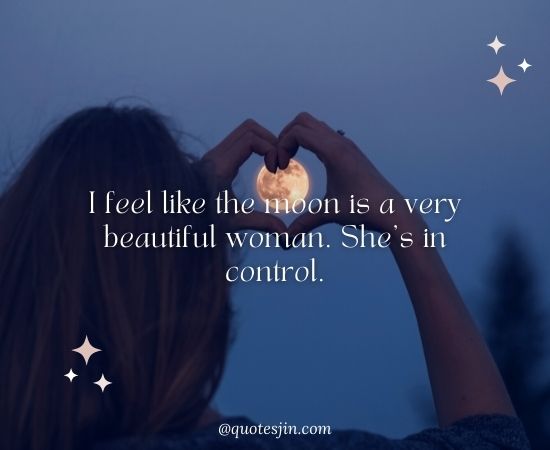 I feel like the moon is a very beautiful woman. She’s in control.
– Ravyn Lenae 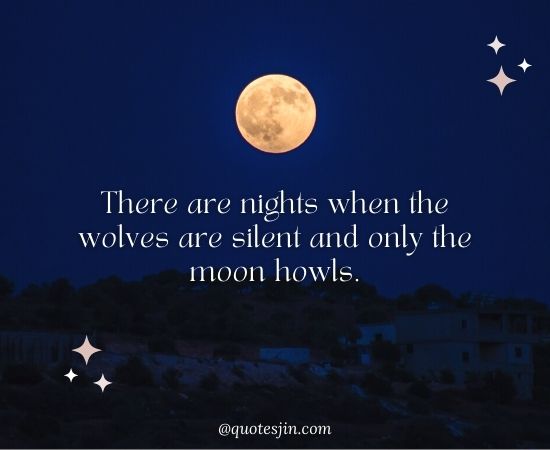 There are nights when the wolves are silent and only the moon howls.
– George Carlin 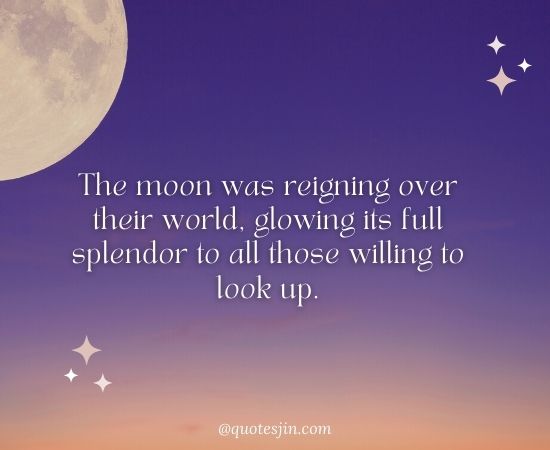 The moon was reigning over their world, glowing its full splendor to all those willing to look up.
– Irina Serban 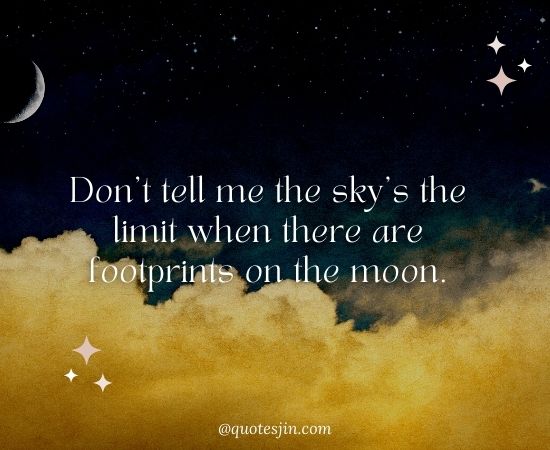 Don’t tell me the sky’s the limit when there are footprints on the moon.
– Paul Brandt 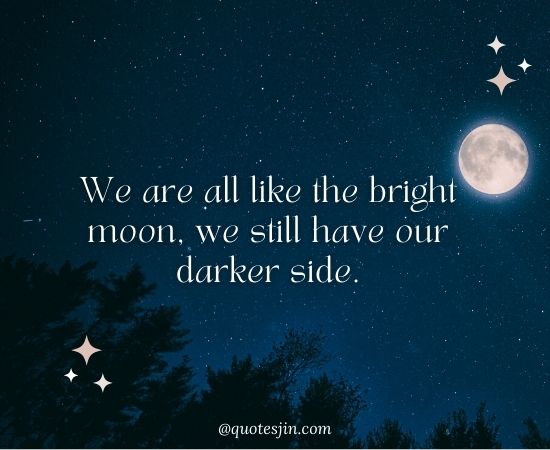 We are all like the bright moon, we still have our darker side.
– Khalil Gibran 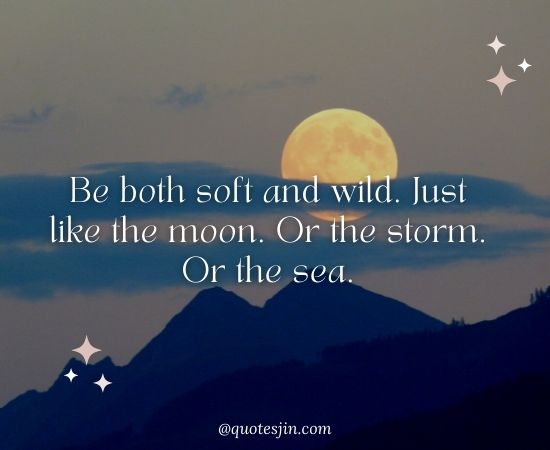 Be both soft and wild. Just like the moon. Or the storm. Or the sea.
– Victoria Erickson 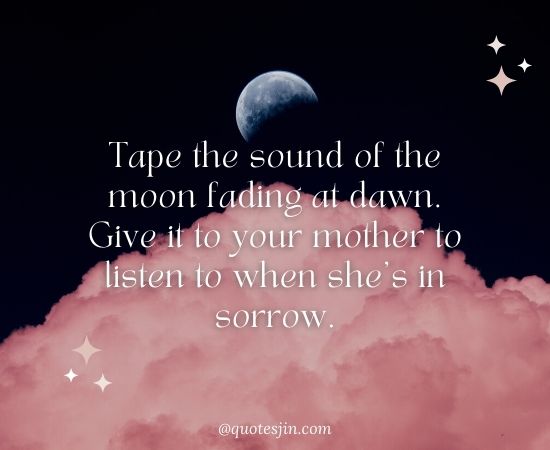 Tape the sound of the moon fading at dawn. Give it to your mother to listen to when she’s in sorrow.
– Yoko Ono

The moon is the first milestone on the road to the stars.
– Arthur C. Clarke

You can be the moon and still be jealous of the stars.
– Gary Allan

The moon is the reflection of your heart and moonlight is the twinkle of your love.
– Debasish Mridha

But even when the moon looks like it’s waning… it’s actually never changing shape. Don’t ever forget that.
– Ai Yazawa

Always remember we are under the same sky, looking at the same moon.
– Maxine Lee

The moon does not fight. It attacks no one, It does not worry, It does not try to crush others, It keeps to its course, but by its very nature, it gently influences. What other body could pull an entire ocean from shore to shore? The moon is faithful to its nature and its power is never diminished.
– Deng Ming-Dao

Shoot for the moon. Even if you miss, you’ll land among the stars.
– Les Brown

A doctor once told me I feel too much. I said, so does god. that’s why you can see the grand canyon from the moon.
– Andrea Gibson

The moon is a friend for the lonesome to talk to.
– Carl Sandburg

That what secretly flows between us today, will gleam tomorrow, the way full moon does.
– Rafy Rohaan

The moon was so beautiful that the ocean held up a mirror.
– Ani DiFranco

It is a beautiful and delightful sight to behold the body of the Moon.
– Galileo Galilei

Most Famous Quotes About the Moon

Have you ever heard the wolf cry to the blue, corn moon?
– Pocahantas

She used to tell me that a full moon was when mysterious things happen, and wishes come true.
– Shannon A. Thompson

The moon will guide you through the night with her brightness, but she will always dwell in the darkness, in order to be seen.
– Shannon L. Alder

Drink in the moon as though you might die of thirst.
– Sanober Khan

For when I look at the moon I do not see a hostile, empty world. I see the radiant body where man has taken his first steps into a frontier that will never end.
– David R. Scott

She is twice as beautiful as the moon and all of the stars together.
– Giovannie de Sadeleer

I swear, the reason for full moons is so the gods can more clearly see the mischief they create.
– Michael J. Sullivan

Do not swear by the moon, for she changes constantly. Then your love would also change.
– William Shakespeare

Don’t worry if you’re making waves just by being yourself. The moon does it all the time.
– Scott Stabile

The moon lives in the lining of your skin.
– Pablo Neruda

Drag me to the moon to catch a star and seize its brilliance as I’m swept up in amorphous dust.
– Bradley

With freedom, books, flowers, and the moon who could not be happy?
– Oscar

Perhaps the crescent moon smiles in doubt at being told that it is a fragment awaiting perfection.
– Rabindranath Tagore

Full moon is a good fisherman; every eyes are easily caught in his net!
– Mehmet Murat ildan

How sweet the moonlight sleeps upon this bank!
– William Shakespeare

How many ways can you describe the sky and the moon?
– Toni Morrison

As different as a moonbeam from lightning, or frost from fire.
– Emily Brontë

She and the moon could always be found playing in the darkness.
– A.J. Lawless

We ran as if to meet the moon.
– Robert Frost

I’m as old as the moon and the stars, and as young as the trees and the lakes.
– Afrika Bambaataa

I like to think that the moon is there even if I am not looking at it.
– Albert Einstein

That’s one small step for a man, one giant leap for mankind.
– Neil Armstrong

Moonlight drowns out all but the brightest stars.
– J.R.R. Tolkien

Yours is the light by which my spirit’s born: – you are my sun, my moon, and all my stars.
– E.E. Cummings

The moon shines full on the full of the moon.
– Anthony T. Hinks

This is not only a full moon for me. This is an image of your face for me.
– Gaurav G.R.V. Sharma

I love to think that animals and humans and plants and fishes and trees and stars and the moon are all connected.
– Gloria Vanderbilt

Many solemn nights blond moon, we stand and marvel…Sleeping our noons away.
– Teitoku

A crescent moon and an innocent shall find their glory and adoration at the end of the tunnel.
– P.S. Jagadeesh Kumar

In the hopes of reaching the moon men fail to see the flowers that blossom at their feet.
– Albert Schweitzer

In the moonlight which is always sad, as the light of the sun itself is — as the light called human life is — at its coming and its going.
– Charles Dickens

There might be a connection between the moon’s energy when it’s full and the electrical impulses in the brain.
– Colin Cotterill

Your thoughts are a veil on the face of the Moon. That Moon is your heart, and those thoughts cover your heart. So let them go, just let them fall into the water.
– Rumi

The moon is the queen of everything. She rules the oceans, rivers, rain. When I am asked whose tears these are; I always blame the moon.
– Lucille Clifton

Life is too short to not have fun; we are only here for a short time compared to the sun and the moon and all that.
– Coolio

I always look up at the moon and see it as the single most romantic place within the cosmos.
– Tom Hanks

I’d rather live in a world where I get to love the moon than in one where I don’t, even if the moon won’t return the feeling.
– Alex London

During the day the Sun causes wounds. And in the night the Moon heals the wounds. The mountain waits all day for the night when his moon will be finally bright.
– Suyasha Subedi

With the light all around us, we felt secret in that moon–infused water like pearls forming in the soft tissues of oysters.
– Pat Conroy

I can feel the moon’s love for the earth in my soul when it’s magical silent silvery light touches my heart.
– Debasish Mridha

If you strive for the Moon, maybe you’ll get over the fence.
– James Woods

The sun loves the moon so much that he dies every night to let her breathe, and in return, she reflects his love.
-​ Jeffrey Fry

Be like the moon in someone’s sky and show her the way of life with your loving silvery lights during the darkness.
– Debasish Mridha

When I admire the wonders of a sunset or the beauty of the moon, my soul expands in the worship of the creator.
– Mahatma Gandhi

Tell me what you feel in your room when the full moon is shining in upon you and your lamp is dying out, and I will tell you how old you are, and I shall know if you are happy.
– Henri Frederic Amiel

The Moon has been long linked to madness and lunacy. Even today, people sometimes superstitiously blame the Moon, especially the full Moon.
– Ken Croswell

The reason we shine is because you give us the light to shine and we’ll be the moon for you.
– Jeon Jungkook

The rain drags black sun down, but the rain dried by white moon.
– Unknwon

Sun and moon, caught in an endless cycle, never to see one another.
– Unknwon

Be both soft & wild. Just like the moon. Or the storm. Or the sea.
– Victoria Erickson

Like the moon, come out from behind the clouds and shine!
– Unknwon

Aim for the moon. If you miss, you may hit a star.
– W. Clement Stone

Down to earth but still above you.
– Unknown

There are three things that a beggar and a rich person share every day: the sun, the moon, and the stars.
– Matshona Dhliwayo

Three things cannot be long hidden: the sun, the moon, and the truth.
– Buddha

A flower knows, when its butterfly will return, and if the moon walks out, the sky will understand; but now it hurts, to watch you leave so soon, when I don’t know, if you will ever come back.
– Sanober Khan

The Sun loved the Moon so much he died every night just to let her breath.
– Unknown

Too many sunlight passes through my eyes, but I still can’t find the brightness I require on my evenings since I am a moon who lives at night.
– Loannes

Let the love of the moon kiss you good night, let the morning sun wake you up with loving light.
– Debasish Mridha