And a Nobel Peace Prize laureate, and a Baptist minister. Born in 1929 in Atlanta, Georgia, he was the youngest child of Alberta Williams King and mlk, Jr.

He was educated at More house College in Atlanta and Crozer Theological Seminary in Pennsylvania, where he received his Bachelor of Divinity degree in 1951.

In 1954, King became the first African American to be ordained as a minister of the gospel.

He is best known for being an iconic figure in the advancement of civil rights in the United States and around the world, using nonviolent methods following the teachings of Mahatma Gandhi.

Here is the best collection of Martin Luther King Jr. quotes and sayings. 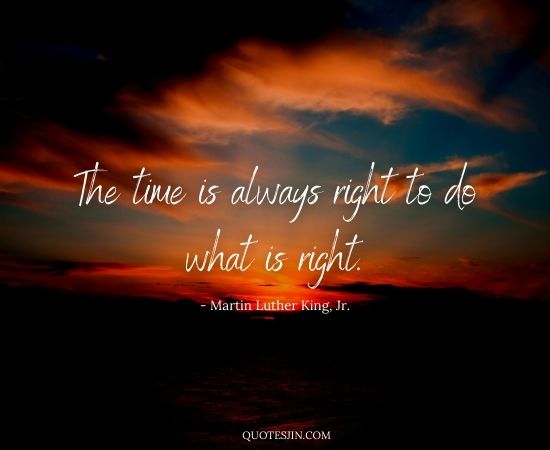 The time is always right to do what is right. – Martin Luther King, Jr. 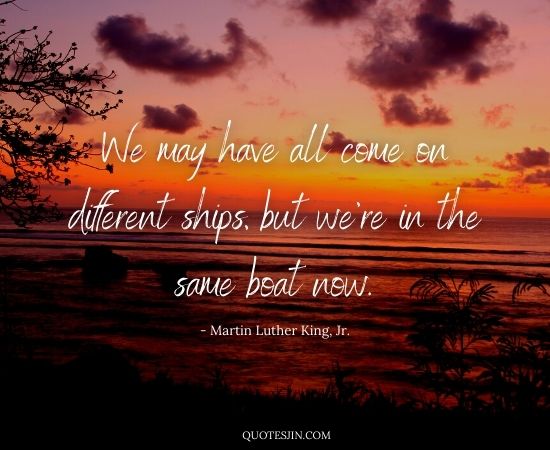 We may have all come on different ships, but we’re in the same boat now. – Martin Luther King, Jr. 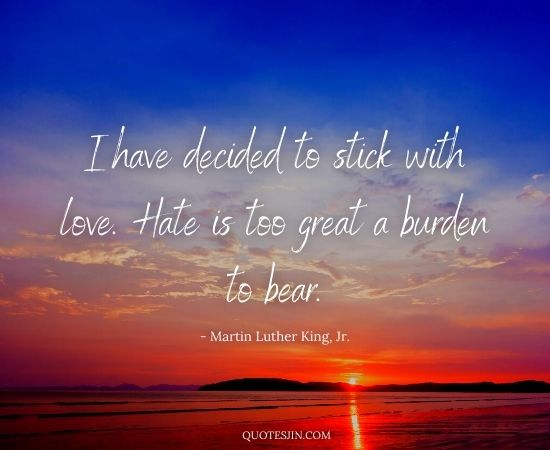 I have decided to stick with love. Hate is too great a burden to bear. – Martin Luther King, Jr. 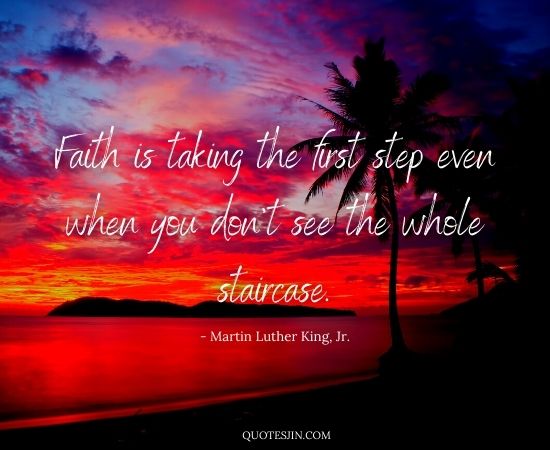 Faith is taking the first step even when you don’t see the whole staircase. – Martin Luther King, Jr. 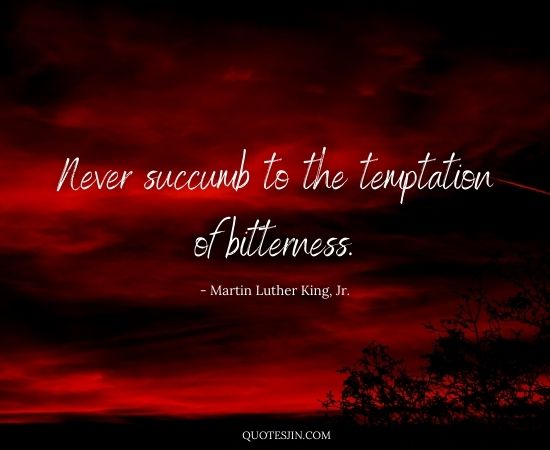 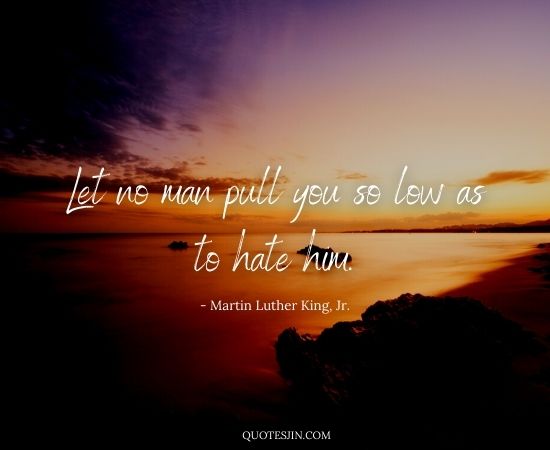 Let no man pull you so low as to hate him. – Martin Luther King, Jr. 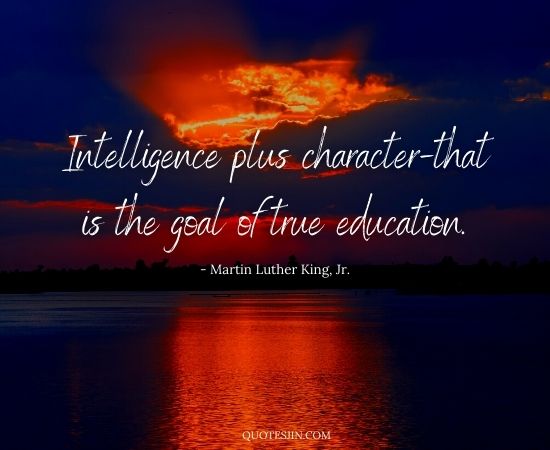 Intelligence plus character-that is the goal of true education. – Martin Luther King, Jr 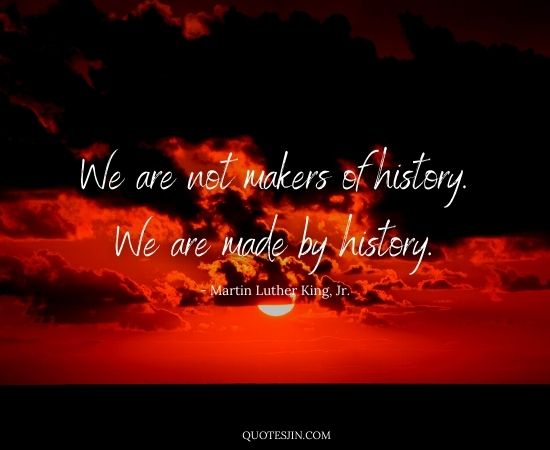 We are not makers of history. We are made by history. – Martin Luther King, Jr. 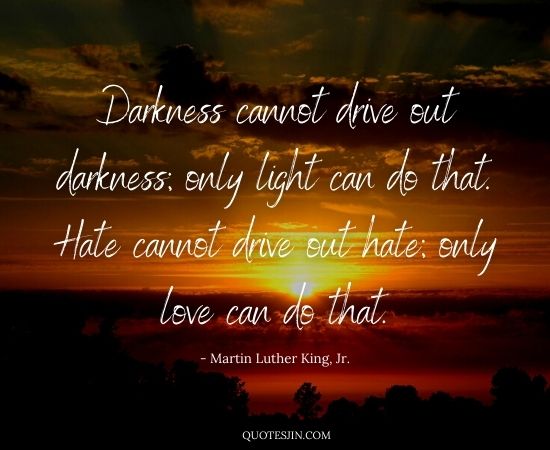 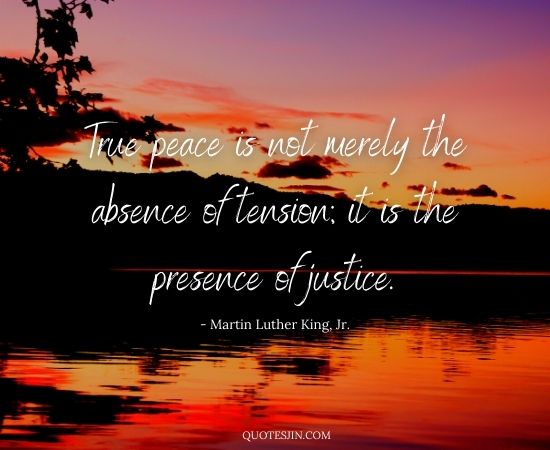 True peace is not merely the absence of tension; it is the presence of justice. – Martin Luther King, Jr. 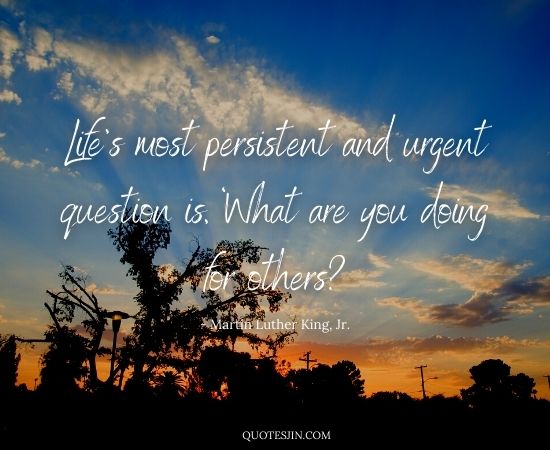 Life’s most persistent and urgent question is, ‘What are you doing for others? – Martin Luther King, Jr. 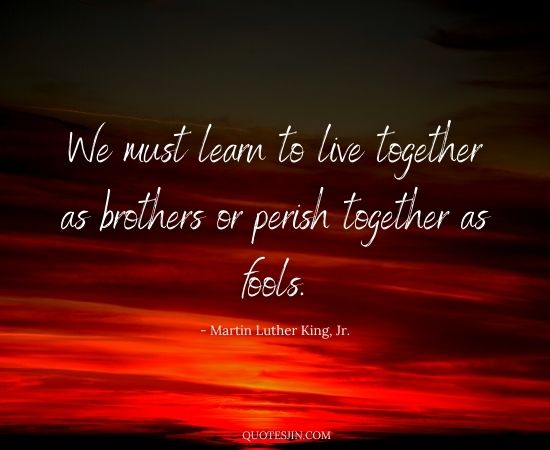 We must learn to live together as brothers or perish together as fools. – Martin Luther King, Jr. 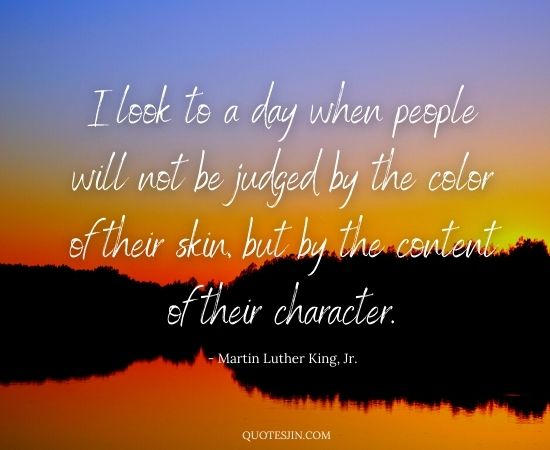 I look to a day when people will not be judged by the color of their skin, but by the content of their character. – Martin Luther King, Jr.

One day we will learn that the heart can never be totally right when the head is totally wrong. – Martin Luther King, Jr. 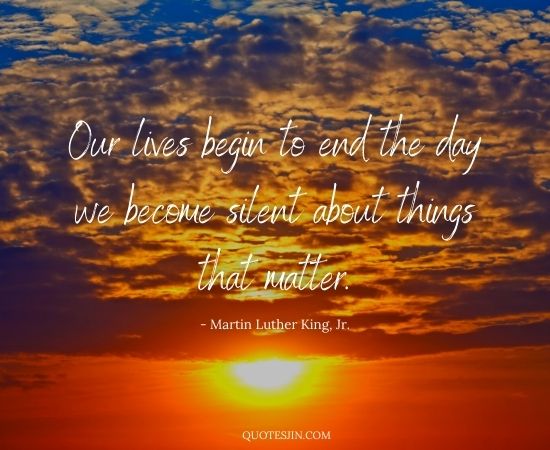 Our lives begin to end the day we become silent about things that matter. – Martin Luther King, Jr. 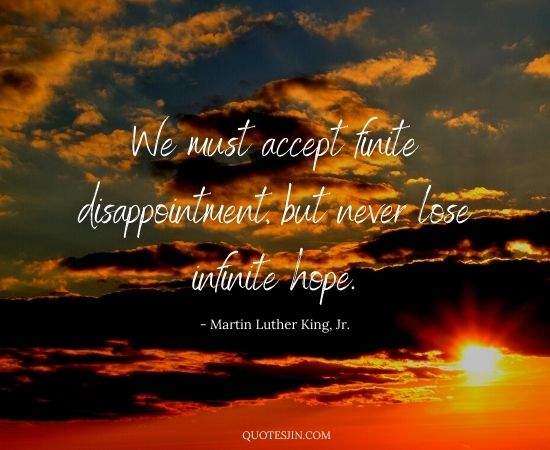 We must accept finite disappointment, but never lose infinite hope. 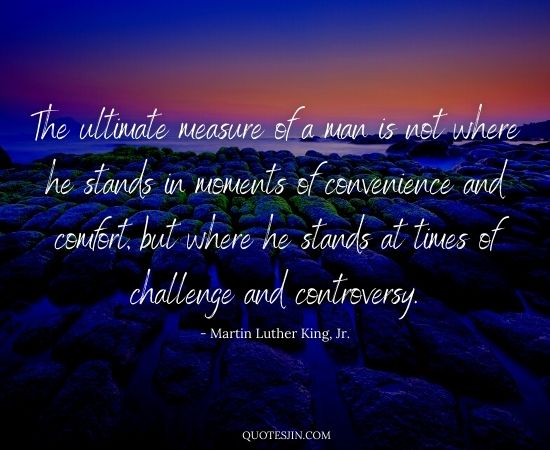 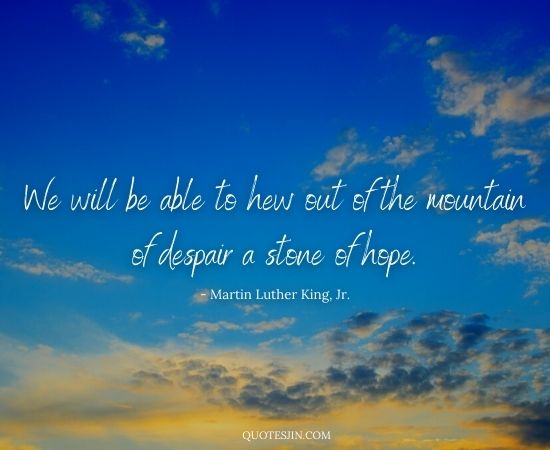 We will be able to hew out of the mountain of despair a stone of hope.

Love is the only force capable of transforming an enemy into friend.

The ultimate tragedy is not the oppression and cruelty by the bad people but the silence over that by the good people.

Our scientific power has outrun our spiritual power. We have guided missiles and misguided men.

All labor that uplifts humanity has dignity and importance and should be undertaken with painstaking excellence.

We must use time creatively, in the knowledge that the time is always ripe to do right.

Whatever affects one directly, affects all indirectly.

Out of the mountain of despair, a stone of hope.

Nothing in all the world is more dangerous than sincere ignorance and conscientious stupidity.

Change does not roll in on the wheels of inevitability but comes through continuous struggle.

For when people get caught up with that which is right and they are willing to sacrifice for it, there is no stopping point short of victory.

We know through painful experience that freedom is never voluntarily given by the oppressor, it must be demanded by the oppressed. 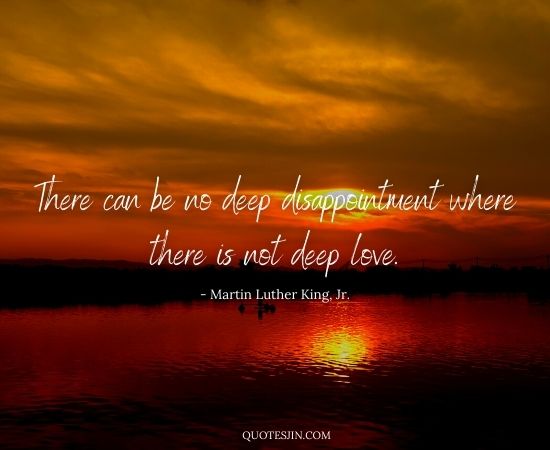 There can be no deep disappointment where there is not deep love.

An individual has not started living until he can rise above the narrow confines of his individualistic concerns to the broader concerns of all humanity.

That old law about ‘an eye for an eye’ leaves everybody blind. The time is always right to do the right thing.

A genuine leader is not a searcher for consensus but a molder of consensus.

I believe that unarmed truth and unconditional love will have the final word in reality. This is why right, temporarily defeated, is stronger than evil triumphant.

The quality, not the longevity, of one’s life is what is important.

There is nothing more tragic than to find an individual bogged down in the length of life, devoid of breadth.

We’ve got some difficult days ahead. But it really doesn’t matter with me now because I’ve been to the mountaintop… I’ve looked over and I’ve seen the promised land. I may not get there with you. But I want you to know tonight that we as a people will get to the promised land.

Man must evolve for all human conflict a method which rejects revenge, aggression and retaliation. The foundation of such a method is love.

I have a dream that one day every valley shall be exalted, every hill and mountain shall be made low, the rough places will be made straight and the glory of the Lord shall be revealed and all flesh shall see it together.

The beauty of genuine brotherhood and peace is more precious than diamonds or silver or gold.

There comes a time when people get tired of being pushed out of the glittering sunlight of life’s July and left standing amid the piercing chill of an alpine November.

Injustice anywhere is a threat to justice everywhere. We are caught in an inescapable network of mutuality, tied in a single garment of destiny. Whatever affects one directly, affects all indirectly. 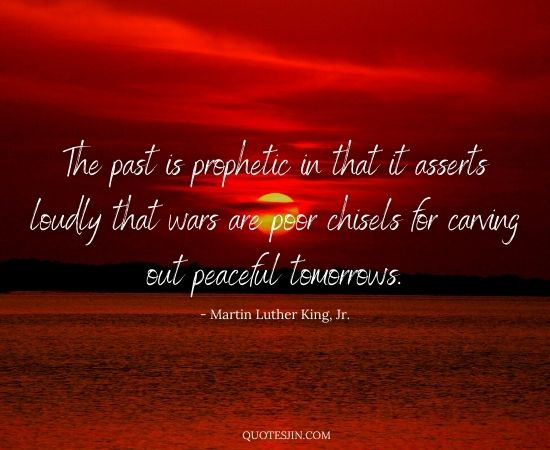 The past is prophetic in that it asserts loudly that wars are poor chisels for carving out peaceful tomorrows.

Violence is immoral because it thrives on hatred rather than love…violence ends up defeating itself. It creates bitterness in the survivors and brutality in the destroyers.

Let us not seek to satisfy our thirst for freedom by drinking from the cup of bitterness and hatred.

If we are to have peace on earth, our loyalties must become ecumenical rather than sectional. Our loyalties must transcend our race, our tribe, our class, and our nation; and this means we must develop a world perspective.

It is not enough to say we must not wage war. It is necessary to love peace and sacrifice for it.

Nonviolence is absolute commitment to the way of love. Love is not emotional bash; it is not empty sentimentalism. It is the active outpouring of one’s whole being into the being of another.

I submit that an individual who breaks a law that conscience tells him is unjust, and who willingly accepts the penalty of imprisonment in order to arouse the conscience of the community over its injustice, is in reality expressing the highest respect for law.

Human progress is neither automatic nor inevitable… Every step toward the goal of justice requires sacrifice, suffering, and struggle; the tireless exertions and passionate concern of dedicated individuals.

Rarely do we find men who willingly engage in hard, solid thinking. There is an almost universal quest for easy answers and half-baked solutions. Nothing pains some people more than having to think.

It may be true that the law cannot make a man love me, but it can keep him from lynching me, and I think that’s pretty important. 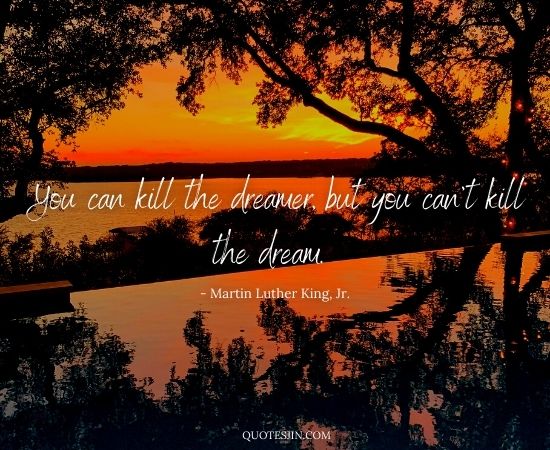 A right delayed is a right denied. – mlk

I want to be the white man’s brother, not his brother in law. – mlk

Seeing is not always believing.

A riot is the language of the unheard.

Even though we face the difficulties of today and tomorrow, I still have a dream.

Human salvation lies in the hands of the creatively maladjusted.

At the center of non-violence stands the principle of love.

Means we use must be as pure as the ends we seek.

To other countries, I may go as a tourist, but to India, I come as a pilgrim.

Forgiveness is not an occasional act; it is a constant attitude.

If I cannot do great things, I can do small things in a great way.

The hottest place in Hell is reserved for those who remain neutral in times of great moral conflict.

The moral arc of the universe bends at the elbow of justice.

Almost always, the creative dedicated minority has made the world better. 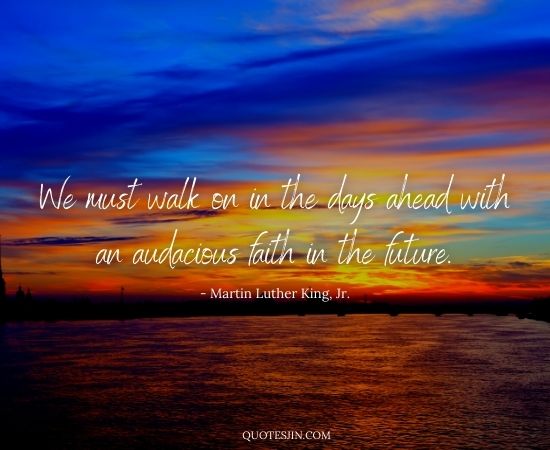 We must walk on in the days ahead with an audacious faith in the future.

There comes a time when one must take a position that is neither safe, nor politic, nor popular, but he must take it because conscience tells him it is right.

We shall match your capacity to inflict suffering by our capacity to endure suffering. We will meet your physical force with soul force. Do to us what you will. And we shall continue to love you.

Those who are not looking for happiness are the most likely to find it, because those who are searching forget that the surest way to be happy is to seek happiness for others.

I know that love is ultimately the only answer to mankind’s problems.

I just want to do God’s will. And he’s allowed me to go to the mountain. And I’ve looked over, and I’ve seen the promised land! I may not get there with you, but I want you to know tonight that we as a people will get to the promised land.

Whatever your life’s work is, do it well. A man should do his job so well that the living, the dead, and the unborn could do it no better.

That’s love, you see. It is redemptive, and this is why Jesus says love. There’s something about love that builds up and is creative. There is something about hate that tears down and is destructive. So love your enemies.

Ten thousand fools proclaim themselves into obscurity, while one wise man forgets himself into immortality.

You know, a lot of people don’t love themselves. And they go through life with deep and haunting emotional conflicts. So the length of life means that you must love yourself. And you know what loving yourself also means? It means that you’ve got to accept yourself.

He who passively accepts evil is as much involved in it as he who helps to perpetrate it. He who accepts evil without protesting against it is really cooperating with it. 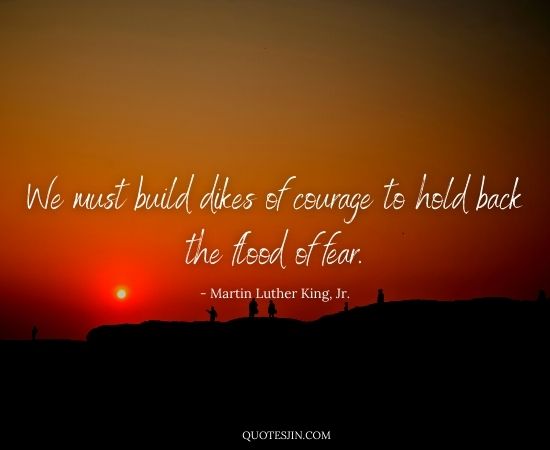 We must build dikes of courage to hold back the flood of fear.

There comes a time when one must take a position that is neither safe nor politic nor popular, but he must take it because his conscience tells him it is right.

A nation that continues year after year to spend more money on military defense than on programs of social uplift is approaching spiritual doom.

A man who won’t die for something is not fit to live.

Never forget that everything Hitler did in Germany was legal.

Hate is too great a burden to bear. I have decided to love.

The sweltering summer of the Negro’s legitimate discontent will not pass until there is an invigorating autumn of freedom and equality.

In some not too distant tomorrow the radiant stars of love and brotherhood will shine over our great nation with all their scintillating beauty.

Everything that we see is a shadow cast by that which we do not see.

Hate is just as injurious to the hater as it is to the hated. Like an unchecked cancer, hate corrodes the personality and eats away its vital unity. Many of our inner conflicts are rooted in hate. This is why psychiatrists say, “Love or perish.” Hate is too great a burden to bear.

In conclusion, Martin Luther King Jr. was a prophet who still inspires people to be the best they can be, not only in their neighbour hoods but in the world. The failure of his dreams are not our fault and we should never let them happen again.

Martin Luther King Jr.’s quotes and teachings inspire us to strive for justice and equality for all humans, regardless of ethnicity or gender.