History quotes are a great way to get a new perspective on life. We must study history in order to understand how we became who we are and what we believe today. These quotes are meant to inspire you and remind us to keep our eyes on the past so we can live a better future.

What better way to start the day than with a history quote?

Whether you’re gearing up for an important meeting, or you just want a little dose of wisdom in your life, the history quotes are a great way to get a little inspiration.

Here is the best collection of history quotes and sayings. 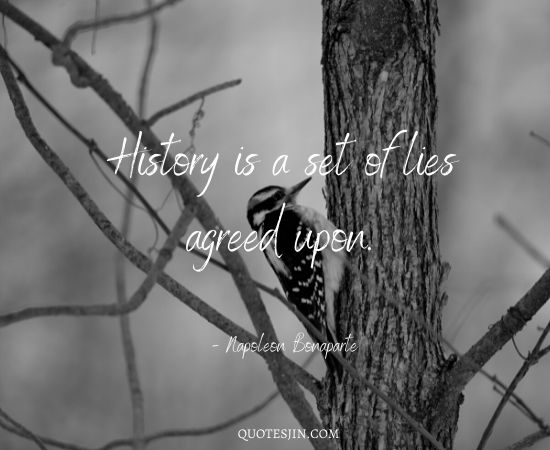 History is a set of lies agreed upon. – Napoleon Bonaparte 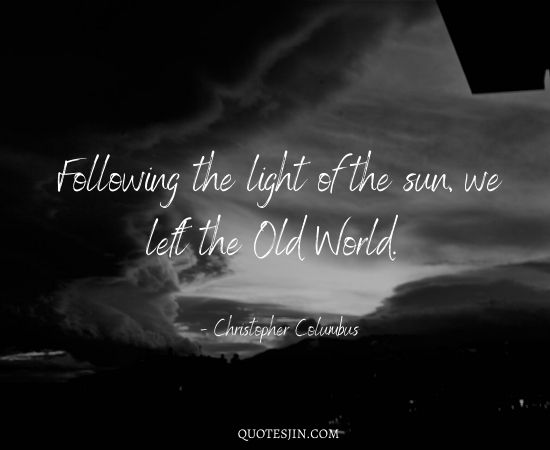 Following the light of the sun, we left the Old World. – Christopher Columbus 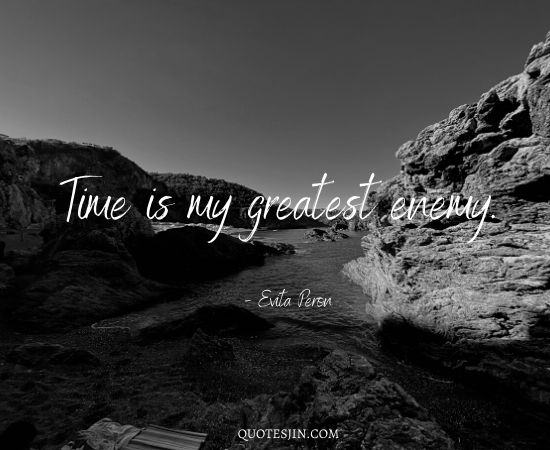 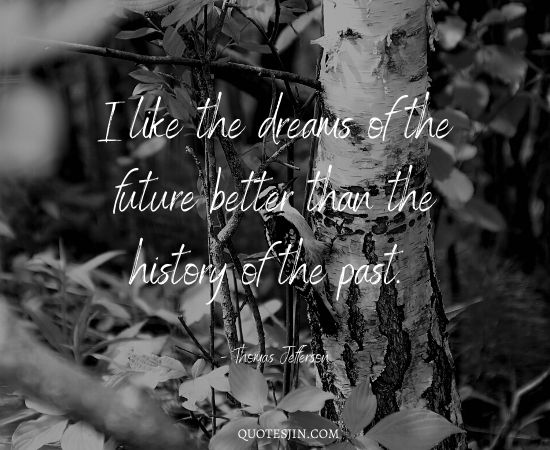 I like the dreams of the future better than the history of the past. – Thomas Jefferson 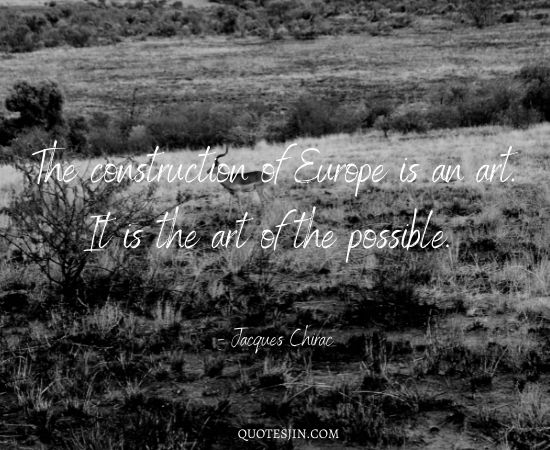 The construction of Europe is an art. It is the art of the possible. – Jacques Chirac 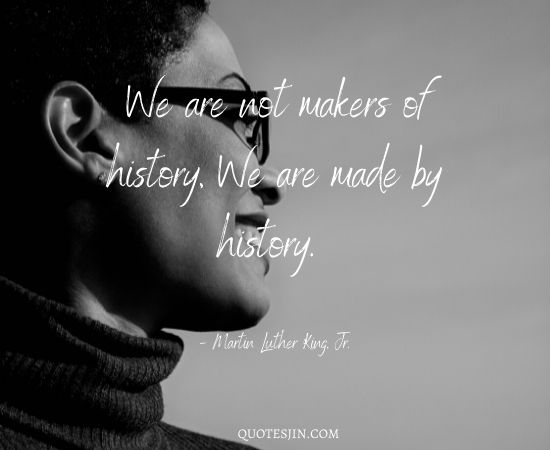 We are not makers of history, We are made by history. – Martin Luther King 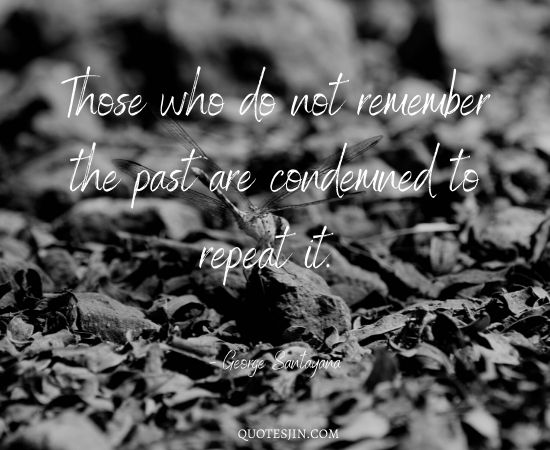 Those who do not remember the past are condemned to repeat it. – George Santayana 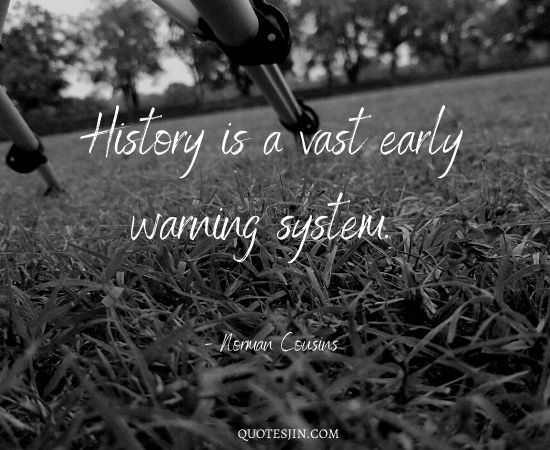 History is a gallery of pictures in which there are few originals and many copies. – Alexis de Tocqueville 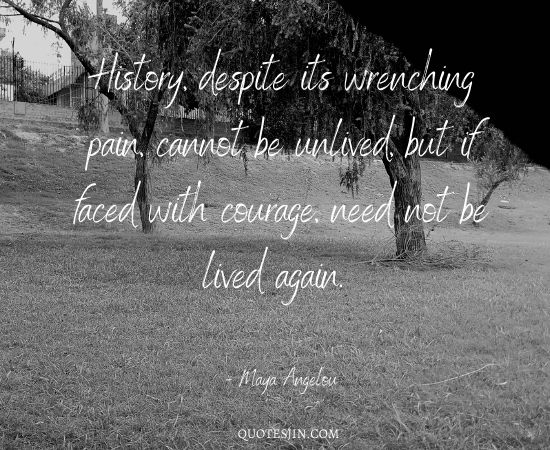 History, despite its wrenching pain, cannot be unlived, but if faced with courage, need not be lived again. – Maya Angelou 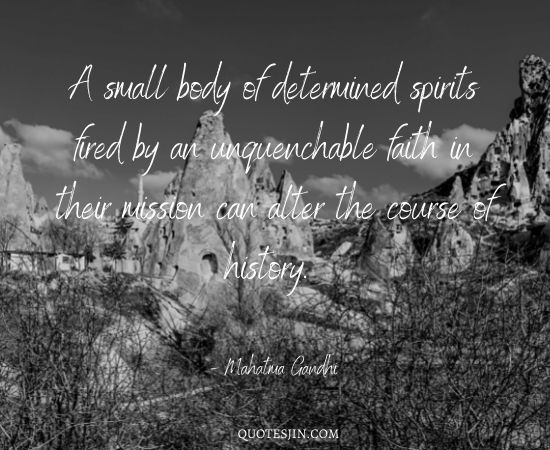 A small body of determined spirits fired by an unquenchable faith in their mission can alter the course of history. – Mahatma Gandhi 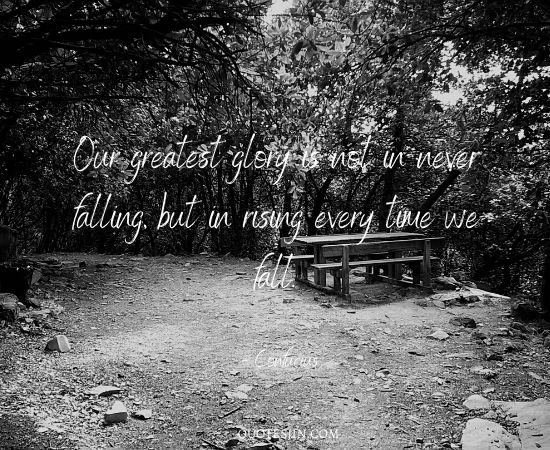 Our greatest glory is not in never falling, but in rising every time we fall. – Confucius 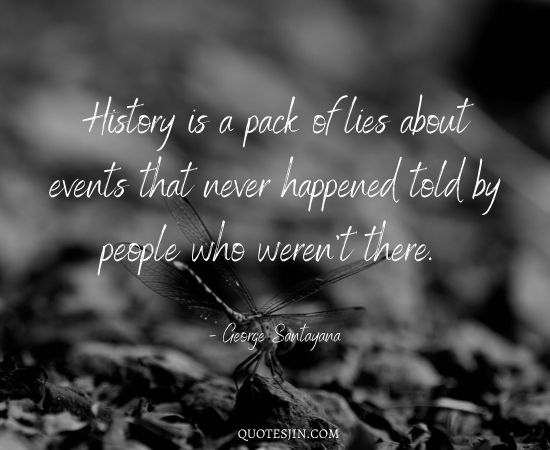 History is a pack of lies about events that never happened told by people who weren’t there. – George Santayana 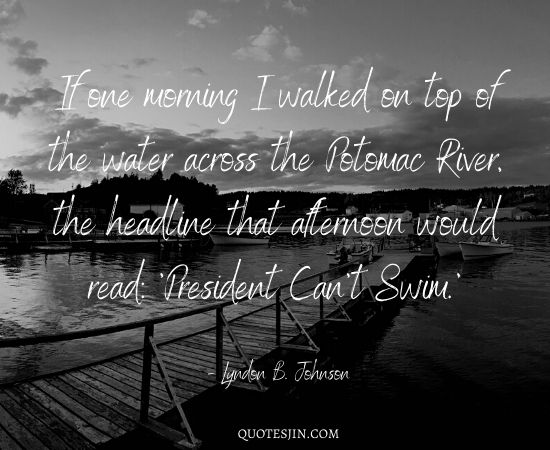 If one morning I walked on top of the water across the Potomac River, the headline that afternoon would read: ‘President Can’t Swim.’ – Lyndon B. Johnson 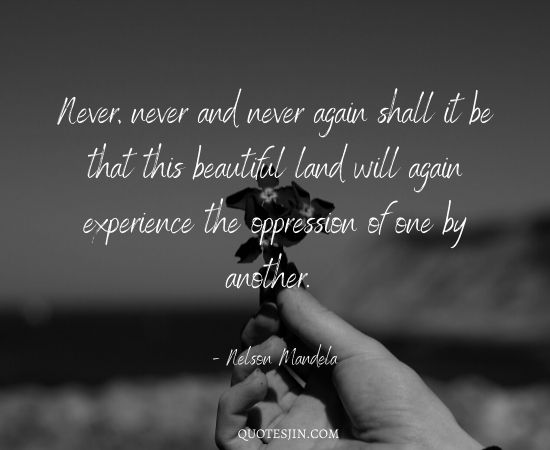 Never, never and never again shall it be that this beautiful land will again experience the oppression of one by another. – Nelson Mandela

Revolutions are the locomotives of history. – Karl Marx

Never doubt that you can change history. You already have. – Marge Piercy

Civilization is a movement and not a condition, a voyage, and not a harbor. – Arnold J. Toynbee

What is history but a fable agreed upon? – Napoleon Bonaparte

When the rich think about the poor, they have poor ideas. – Evita Peron

Legend: A lie that has attained the dignity of age. – H. L. Mencken 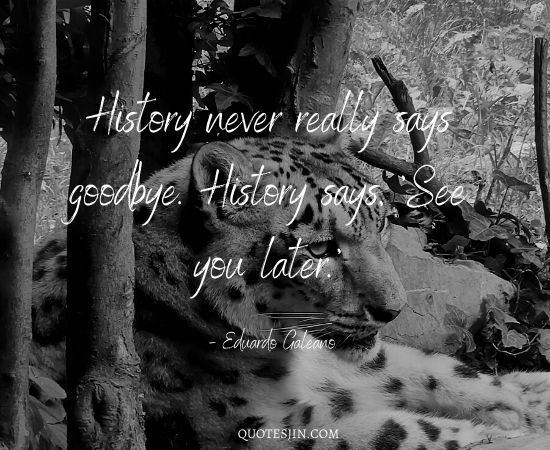 You have to look at history as an evolution of society. – Jean Chretien

The nation was awakened by that deafening shot. – Corazon Aquino

What Britain needs is an iron lady. – Margaret Thatcher

History is an endless repetition of the wrong way of living. – Lawrence Durrell

We cannot defend freedom abroad by deserting it at home. – Edward R. Murrow 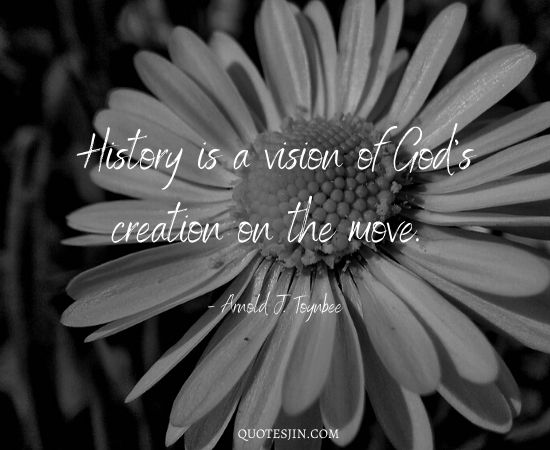 History is a vision of God’s creation on the move. – Arnold J. Toynbee

We learned the value of research in World War II. – Amar Bose

Be as a tower firmly set; Shakes not its top for any blast that blows. – Dante Alighieri

If you will read again what is written, you will see how it was. – Black Elk 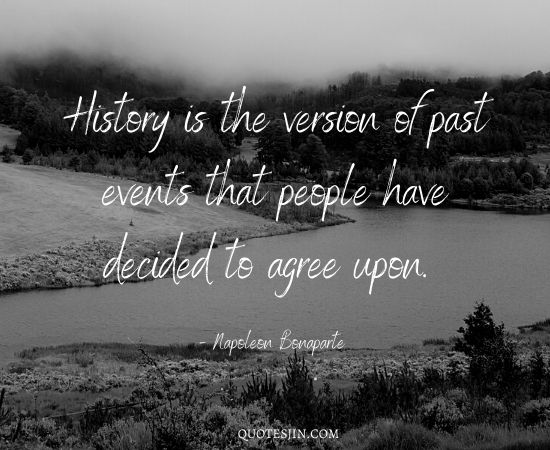 History is the version of past events that people have decided to agree upon. – Napoleon Bonaparte

History is not a burden on the memory but an illumination of the soul. – John Dalberg-Acton

People are trapped in history and history is trapped in them. – James Baldwin

I am what time, circumstance, history, have made of me, certainly, but I am also, much more than that. So are we all. – James Baldwin

The Bible is one of the most genocidal books in history. – Noam Chomsky 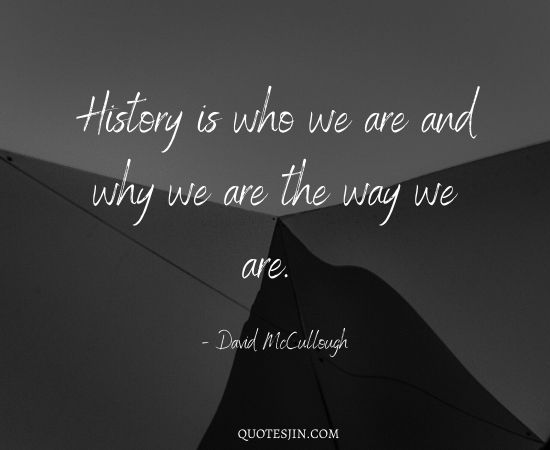 History is who we are and why we are the way we are. – David McCullough

The past is malleable and flexible, changing as our recollection interprets and re-explains what has happened. – Peter L. Berger

History is indeed little more than the register of the crimes, follies, and misfortunes of mankind. – Edward Gibbon

Peace, plenty, and contentment reign throughout our borders, and our beloved country presents a sublime moral spectacle to the world. – James K. Polk

Few will have the greatness to bend history itself; but each of us can work to change a small portion of events, and in the total; of all those acts will be written the history of this generation. – Robert Kennedy

If you are neutral in situations of injustice, you have chosen the side of the oppressor. If an elephant has its foot on the tail of a mouse and you say that you are neutral, the mouse will not appreciate your neutrality. – Desmond Tutu 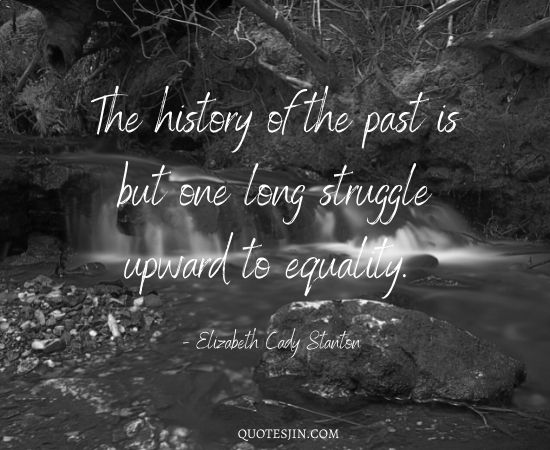 The history of the past is but one long struggle upward to equality. – Elizabeth Cady Stanton

A history is a tool used by politicians to justify their intentions. – Ted Koppel

A truly American sentiment recognizes the dignity of labor and the fact that honor lies in honest toil. – Grover Cleveland

History will be kind to me for I intend to write it. – Winston Churchill

History never looks like history when you are living through it. – John W. Gardner

Observe good faith and justice toward all nations. Cultivate peace and harmony with all. – George Washington

The judicial system is the most expensive machine ever invented for finding out what happened and what to do about it. – Irving R. Kaufman

I came, I saw, I conquered. – Julius Caesar

I come into the peace of wild things who do not tax their lives with forethought of grief… For a time I rest in the grace of the world and am free. – Wendell Berry 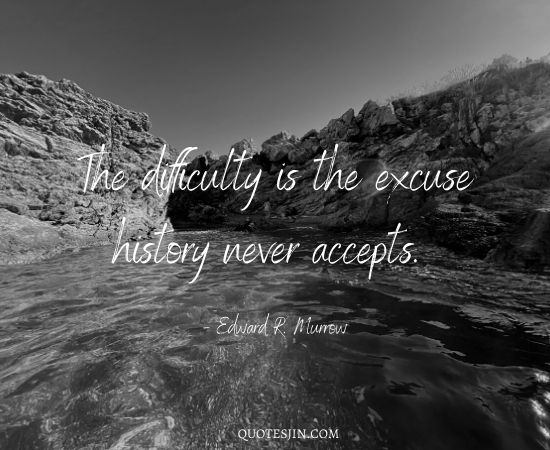 God cannot alter the past, though historians can. – Samuel Butler

In the long term we can hope that religion will change the nature of man and reduce conflict. But history is not encouraging in this respect. The bloodiest wars in history have been religious wars. – Richard M. Nixon

Get up tomorrow early in the morning, and earlier than you did today, and do the best that you can. Always stay near me, for tomorrow I will have much to do and more than I ever had, and tomorrow blood will leave my body above the breast. – Joan of Arc

History will have to record that the greatest tragedy of this period of social transition was not the strident clamor of the bad people, but the appalling silence of the good people. – Martin Luther King, Jr. 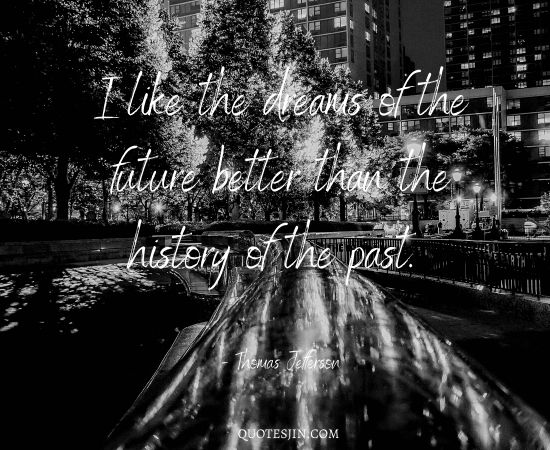 I like the dreams of the future better than the history of the past. – Thomas Jefferson

I am responsible only to God and history. – Francisco Franco

It takes a great deal of history to produce a little literature. – Henry James

There are great legends and great fighters in the history of Mexico, and there will be more to come. – Canelo Alvarez

There is nothing new in the world except the history you do not know. – Harry S Truman

The very concept of objective truth is fading out of the world. Lies will pass into history. – George Orwell

History repeats itself. So you might wanna pay attention. – Quavo

The main thing is to make history, not to write it. – Otto von Bismarck

To provide meaningful architecture is not to parody history but to articulate it. – Daniel Libeskind 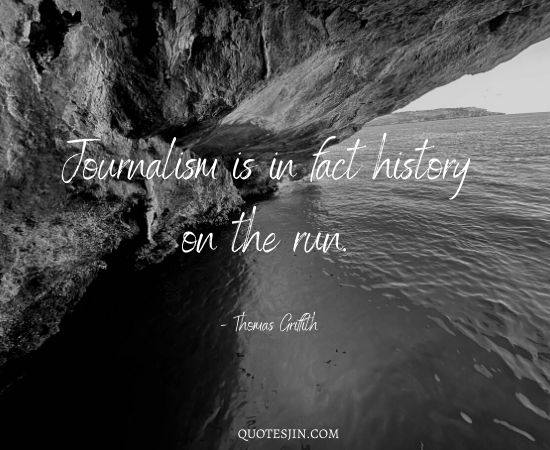 Journalism is in fact history on the run. – Thomas Griffith

In fact history does not belong to us; but we belong to it. – Hans-Georg Gadamer

Something as curious as the monarchy won’t survive unless you take account of people’s attitudes. After all, if people don’t want it, they won’t have it. – Prince Charles

A world without nuclear weapons would be less stable and more dangerous for all of us. – Margaret Thatcher

Most of us spend too much time on the last twenty-four hours and too little on the last six thousand years. – Will Durant

Human history is not the product of the wise direction of human reason, but is shaped by the forces of emotion – our dreams, our pride, our greed, our fears, and our desire for revenge. – Lin Yutang

The Marine Corps is the Navy’s police force and as long as I am President that is what it will remain. They have a propaganda machine that is almost equal to Stalin’s. – Harry S Truman

If one tries to think about history, it seems to me – it’s like looking at a range of mountains. And the first time you see them, they look one way. But then time changes, the pattern of light shifts. Maybe you’ve moved slightly, your perspective has changed. The mountains are the same, but they look very different. – Robert Harris 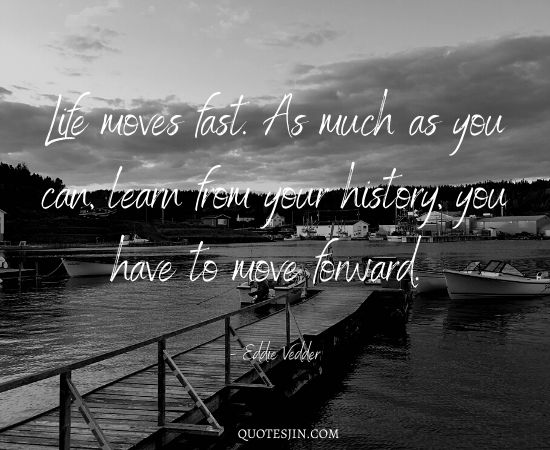 Life moves fast. As much as you can, learn from your history, you have to move forward. – Eddie Vedder

There are so many times and places in history in our world that I just don’t know anything about, and when I learn about them they’re always fascinating. – Andrew Stanton

We don’t want tradition. We want to live in the present and the only history that is worth a tinker’s damn is the history we make today. – Henry Ford

Many of the greatest crimes in history were caused not by hatred, but rather by indifference. They were caused by people who could have done something but did not even bother lifting a finger. So don’t wait. Get out there. Go and vote. – Yuval Noah Harari

Open markets offer the only realistic hope of pulling billions of people in developing countries out of abject poverty while sustaining prosperity in the industrialized world. – Kofi Annan 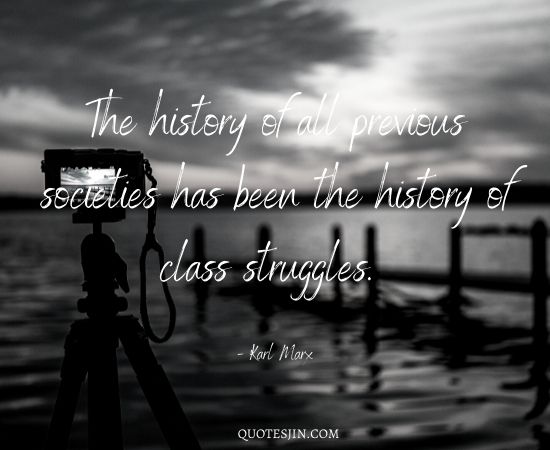 Be honest. We have science, technology, and wealth. What we don’t have is the will, and that’s not a reason that history will accept. – Bono

The only history is a question of one’s struggle inside oneself. But that is the joy of it. One need neither discover Americas nor conquer nations, and yet one has as great a work as Columbus or Alexander, to do. – D. H. Lawrence

France is delighted at this new opportunity to show the world that when one has the will one can succeed in joining peoples who have been brought close by history. – Francois Mitterrand

People take the longest possible paths, digress to numerous dead ends, and make all kinds of mistakes. Then historians come along and write summaries of this messy, nonlinear process and make it appear like a simple, straight line. – Dean Kamen

So that the record of history is absolutely crystal clear. That there is no alternative way, so far discovered, of improving the lot of the ordinary people that can hold a candle to the productive activities that are unleashed by a free enterprise system. – Milton Friedman