Below in this article, you can find some best inspiring freedom quotes to help you live your best life. 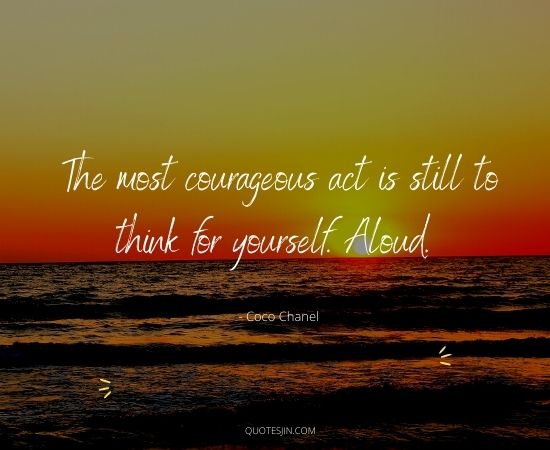 The most courageous act is still to think for yourself. Aloud. – Coco Chanel 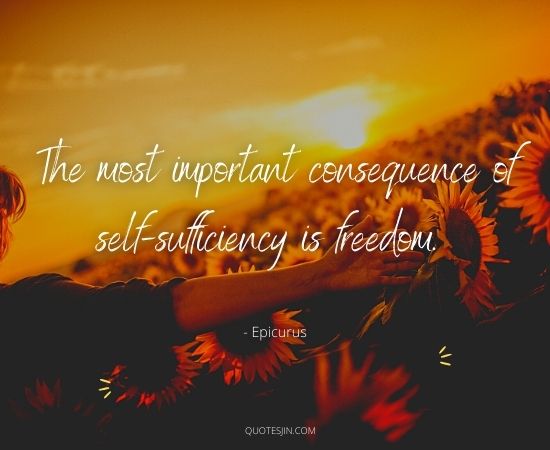 The most important consequence of self-sufficiency is freedom. – Epicurus 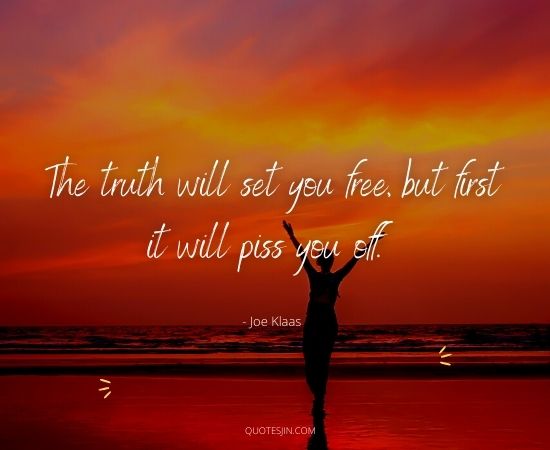 The truth will set you free, but first it will piss you off. – Joe Klaas 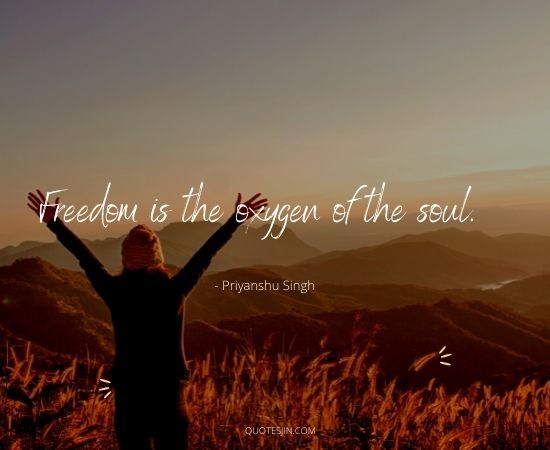 Freedom is the oxygen of the soul. – Priyanshu Singh 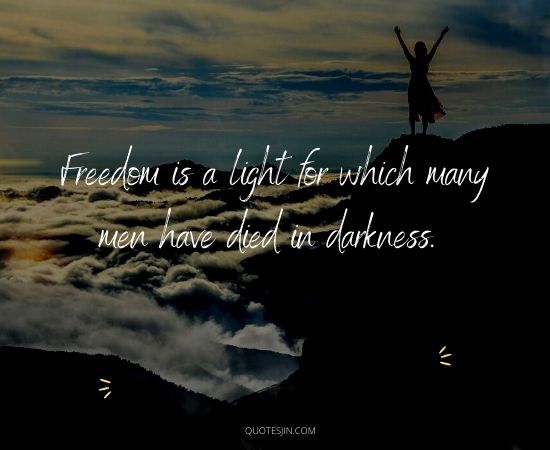 Freedom is a light for which many men have died in darkness. 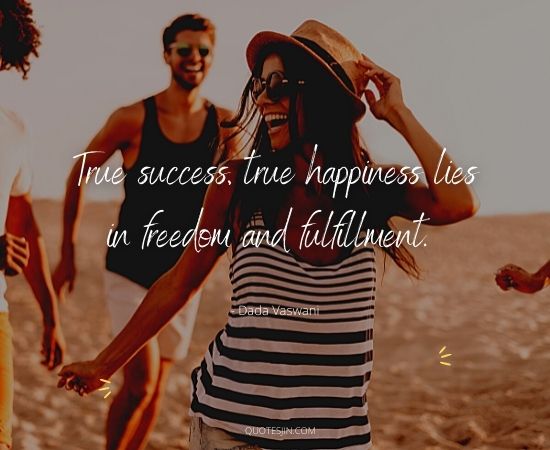 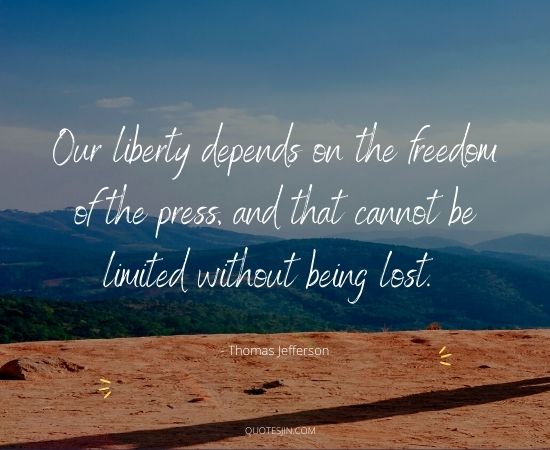 Our liberty depends on the freedom of the press, and that cannot be limited without being lost. – Thomas Jefferson 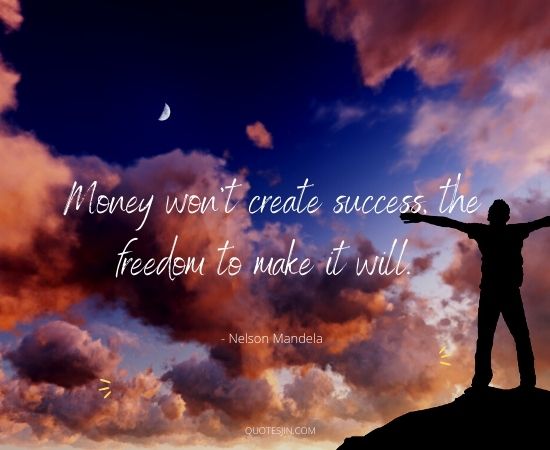 Money won’t create success, the freedom to make it will. – Nelson Mandela 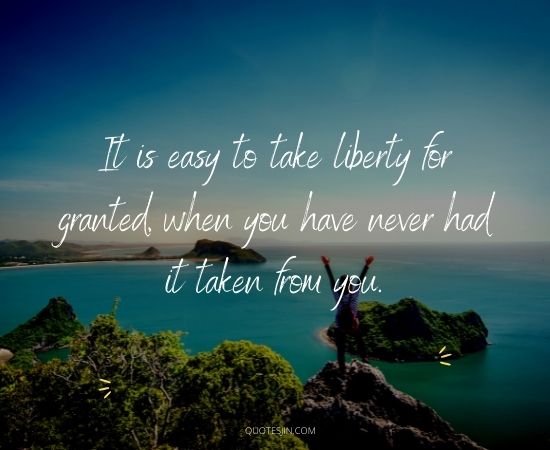 It is easy to take liberty for granted, when you have never had it taken from you. 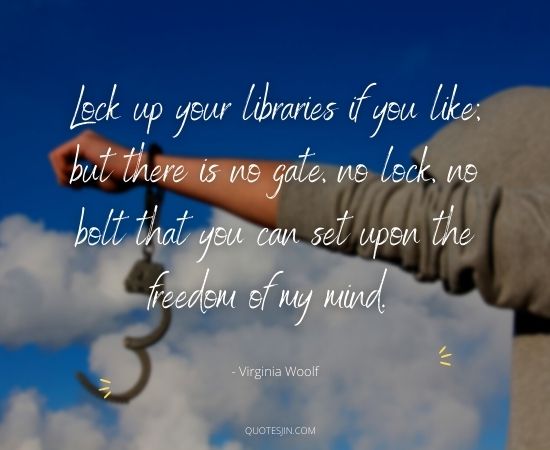 Lock up your libraries if you like; but there is no gate, no lock, no bolt that you can set upon the freedom of my mind. – Virginia Woolf 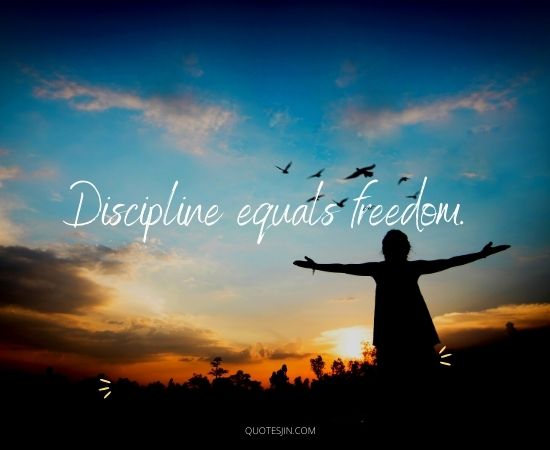 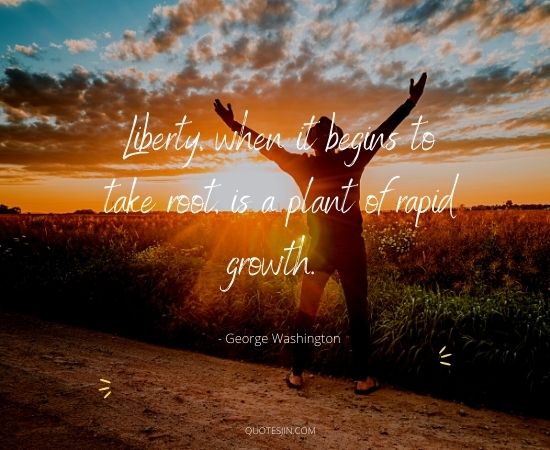 Liberty, when it begins to take root, is a plant of rapid growth. – George Washington 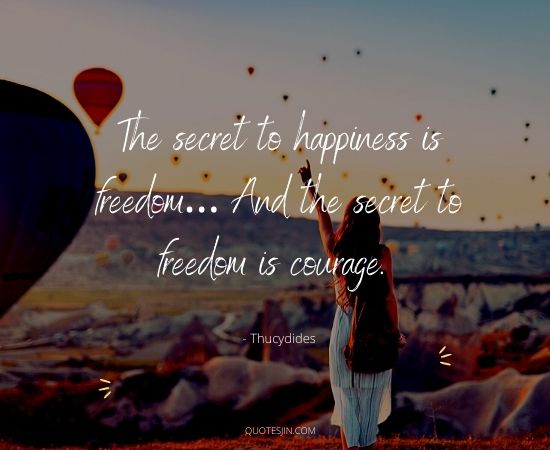 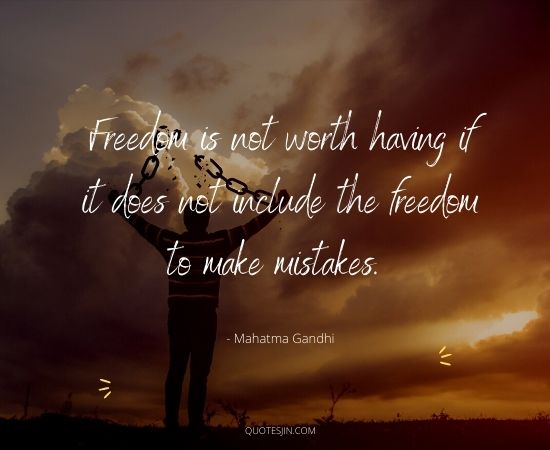 Freedom is not worth having if it does not include the freedom to make mistakes. – Mahatma Gandhi 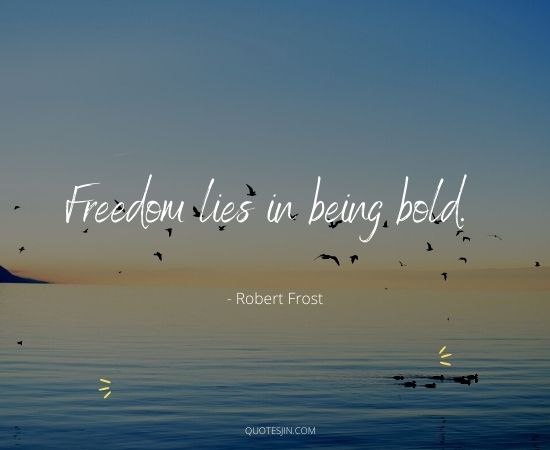 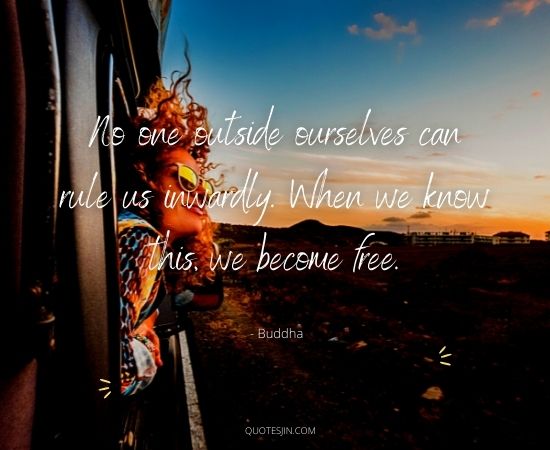 No one outside ourselves can rule us inwardly. When we know this, we become free. – Buddha 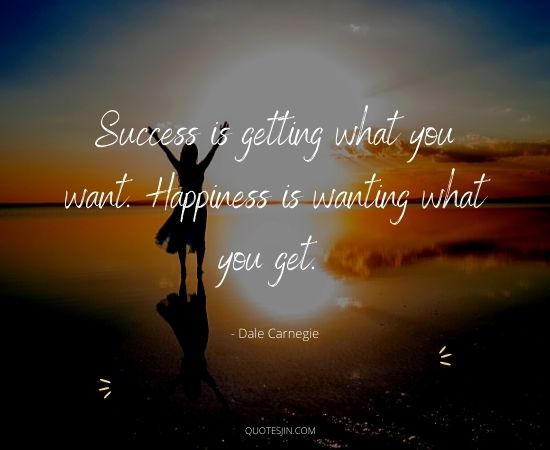 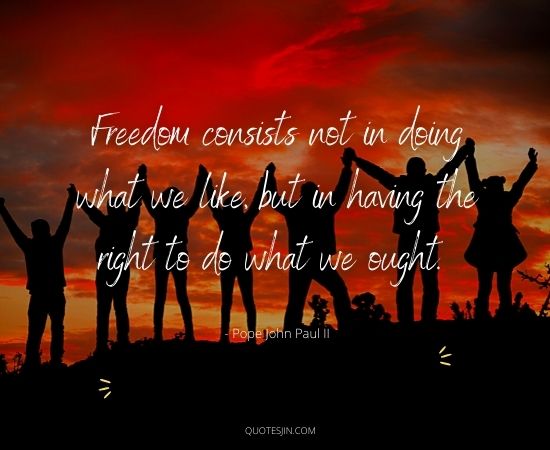 Freedom consists not in doing what we like, but in having the right to do what we ought. – Pope John Paul II 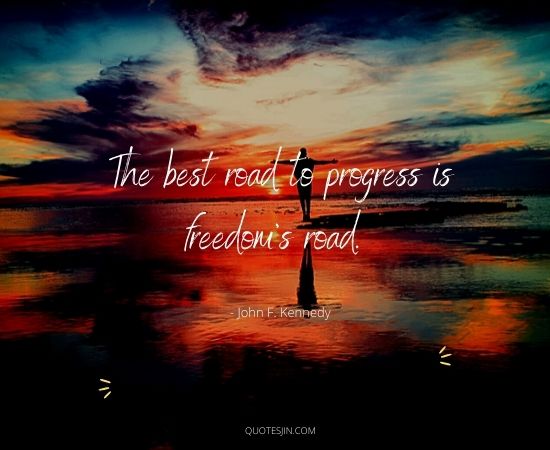 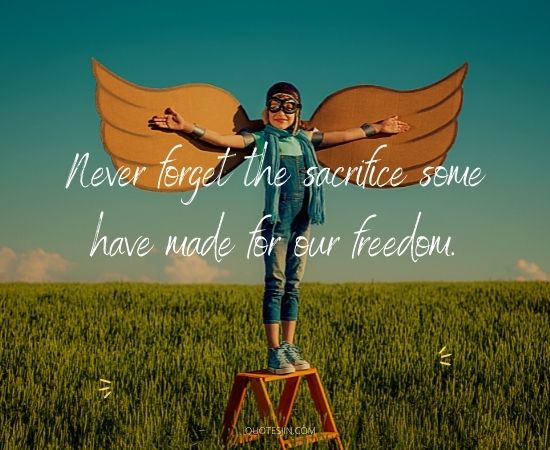 Never forget the sacrifice some have made for our freedom. 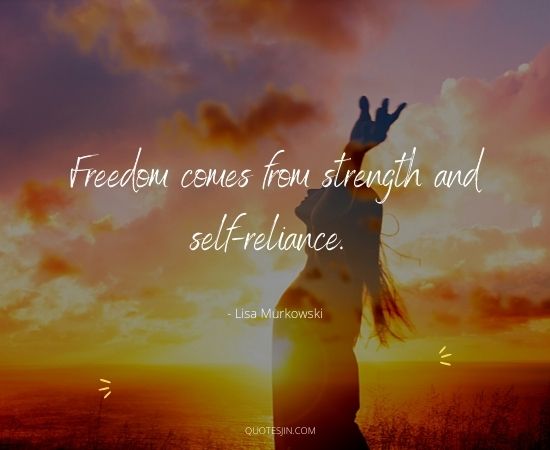 The Most Famous Freedom Quotes 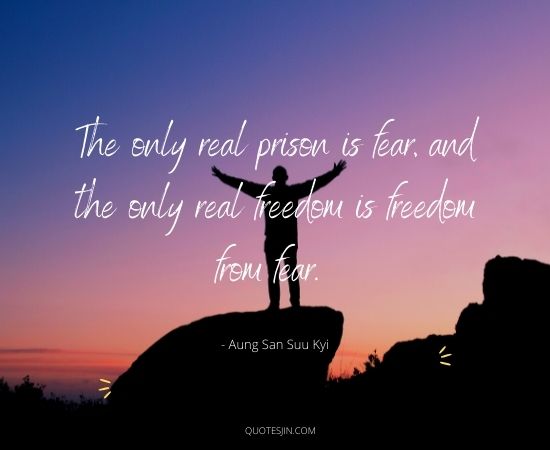 The only real prison is fear, and the only real freedom is freedom from fear. – Aung San Suu Kyi

When a man is denied the right to live the life he believes in, he has no choice but to become an outlaw. – Nelson Mandela

Better to die fighting for freedom then be a prisoner all the days of your life. – Bob Marley

While money has its perks, perhaps the greatest things that can be afforded by it are time and freedom.

The only way to deal with an unfree world is to become so absolutely free that your very existence is an act of rebellion. – Albert Camus

When we lose the right to be different, we lose the privilege to be free. – Charles Evans Hughes

A hero is someone who understands the responsibility that comes with his freedom. – Bob Dylan

I prefer liberty with danger to peace with slavery. – Jean-Jacques Rousseau

Everything that is really great and inspiring is created by the individual who can labor in freedom. – Albert Einstein

Second only to freedom, learning is the most precious option on earth. – Norman Cousins

Education is the key to unlock the golden door of freedom. – George Washington Carver

I know but one freedom and that is the freedom of the mind. – Antoine de Saint-Exupery

When I discover who I am, I’ll be free. – Ralph Ellison

The Best Quotes About Freedom 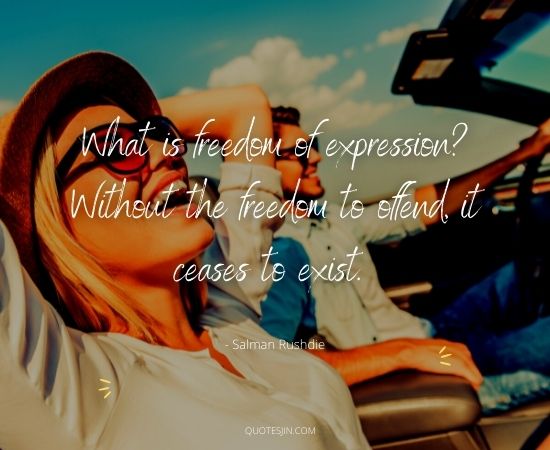 What is freedom of expression? Without the freedom to offend, it ceases to exist. – Salman Rushdie

I find only freedom in the realms of eccentricity. – David Bowie

I’d like to be remembered as a person who wanted to be free and wanted other people to be also free. – Rosa Parks

Freedom is nothing else but a chance to be better. – Albert Camus

There is no easy walk to freedom anywhere, and many of us will have to pass through the valley of the shadow of death again and again before we reach the mountaintop of our desires. – Nelson Mandela

Freedom – to walk free and own no superior. – Walt Whitman

I believe that freedom of speech and freedom of religion go hand-in-hand in America. – Kirk Cameron

I would rather die in freedom on my way back home than starve to death here. – Morning Star

For to be free is not merely to cast off one’s chains, but to live in a way that respects and enhances the freedom of others. – Nelson Mandela

I would like to be remembered as a person who wanted to be free… so other people would be also free. – Rosa Parks

For what avail the plough or sail, or land or life, if freedom fail? – Ralph Waldo Emerson

People demand freedom of speech as compensation for the freedom of thought which they seldom use. – Søren Kierkegaard

Those who expect to reap the blessings of freedom must, like men, undergo the fatigue of supporting it. – Thomas Paine

You wanna fly, you got to give up the shit that weighs you down. – Toni Morrison

Expose yourself to your deepest fear; after that, fear has no power, and the fear of freedom shrinks and vanishes. You are free. – Jim Morrison 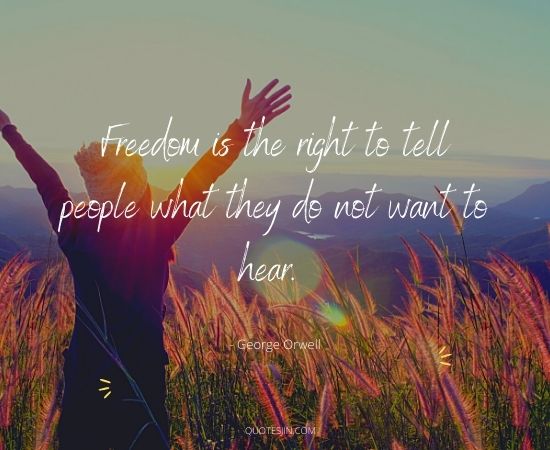 Freedom is the right to tell people what they do not want to hear. – George Orwell

Here is my secret: I don’t mind what happens. – Jiddu Krishnamurti

Honesty is often very hard. The truth is often painful. But the freedom it can bring is worth the trying.

Heresy is another word for freedom of thought. – Graham Greene

We gain freedom when we have paid the full price. – Rabindranath Tagore

We cannot defend freedom abroad by deserting it at home. – Edward R. Murrow

Freedom is what we do with what is done to us. – Jean-Paul Sartre

To enjoy freedom we have to control ourselves. – Virginia Woolf

The truth will set you free. But not until it is finished with you. – David Foster Wallace

Freedom granted only when it is known beforehand that its effects will be beneficial is not freedom. – Friedrich August von Hayek

I stand for freedom of expression, doing what you believe in, and going after your dreams. – Madonna Ciccone

If you’re not ready to die for it, put the word ‘freedom’ out of your vocabulary. – Malcolm X

Freedom is the will to be responsible to ourselves. – Friedrich Nietzsche

Art is the daughter of freedom. – Friedrich Schiller

I don’t care whether you’re a top Wall Street banker, if somebody has to tell you when to be at work, what to wear, and how to behave, you’re not a free person. – Naval Ravikant

The most important kind of freedom is to be what you really are. You trade in your reality for a role. You give up your ability to feel, and in exchange, put on a mask. – Jim Morrison 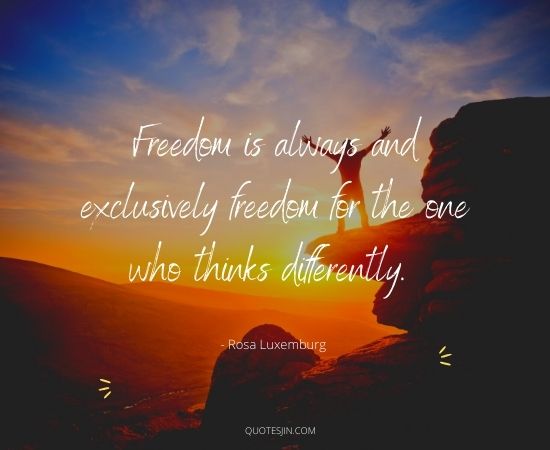 Freedom is always and exclusively freedom for the one who thinks differently. – Rosa Luxemburg

Ultimately we know deeply that the other side of every fear is freedom. – Marilyn Ferguson

If a nation expects to be ignorant and free, in a state of civilization, it expects what never was and will never be. – Thomas Jefferson

Freedom means the opportunity to be what we never thought we would be. – Daniel J. Boorstin

If you’re not ready to die for it, put the word ‘freedom’ out of your vocabulary. – Malcolm X

I am free, no matter what rules surround me. If I find them tolerable, I tolerate them; if I find them too obnoxious, I break them. I am free because I know that I alone am morally responsible for everything I do. – Robert A. Heinlein

Who would be free themselves must strike the blow. Better even to die free than to live slaves. – Frederick Douglass

Seek freedom and become captive of your desires. Seek discipline and find your liberty. – Frank Herbert

The liberties of a people never were, nor ever will be, secure, when the transactions of their rulers may be concealed from them. – Patrick Henry

A place of freedom is the best place to have the most creativity. – Matt McGorry

The desire of gold is not for gold. It is for the means of freedom and benefit. – Ralph Waldo Emerson

There is no such thing as part freedom. – Nelson Mandela

Freedom is a struggle, and we do it together. Not only together as black citizens, but black and white together. – Andrew Young

They who would give up an essential liberty for temporary security, deserve neither liberty or security. – Benjamin Franklin

A part of fate is the freedom of man. Forever wells up the impulse of choosing and acting in his soul. – Ralph Waldo Emerson

I’ve learned that fear limits you and your vision. It serves as blinders to what may be just a few steps down the road for you. The journey is valuable, but believing in your talents, your abilities, and your self-worth can empower you to walk down an even brighter path. Transforming fear into freedom – how great is that? – Soledad O’Brien

When a man is denied the right to live the life he believes in, he has no choice but to become an outlaw. – Nelson Mandela 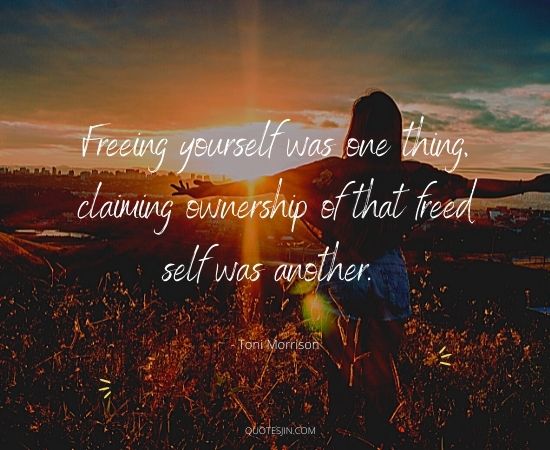 Freeing yourself was one thing, claiming ownership of that freed self was another. – Toni Morrison

The secret of freedom lies in educating people, whereas the secret of tyranny is in keeping them ignorant. – Maximilien Robespierre

When a truth is not given complete freedom, freedom is not complete. – Vaclav Havel

Financial freedom is not about greed. It is to allow the rule to become true: to be who you are.

Necessity is blind until it becomes conscious. Freedom is the consciousness of necessity. – Karl Marx

A friend is someone who gives you total freedom to be yourself. – Jim Morrison

The greatest threat to freedom is the absence of criticism. – Wole Soyinka

I know not what course others may take, but as for me, give me liberty, or give me death! – Patrick Henry

The unhappiest people in this world, are those who care the most about what other people think. – C. JoyBell C.

The cost of freedom is always high, but Americans have always paid it. And one path we shall never choose, and that is the path of surrender, or submission. – John F. Kennedy

In the truest sense, freedom cannot be bestowed; it must be achieved. – Franklin D. Roosevelt

Free people, remember this maxim: we may acquire liberty, but it is never recovered if it is once lost. – Jean-Jacques Rousseau

The freedom from something is not true freedom. The freedom to do anything you want to do is also not the freedom I am talking about. My vision of freedom is to be yourself. – Rajneesh

No person is your friend who demands your silence or denies your right to grow. – Alice Walker

We have no right to believe that freedom can be won without struggle. – Che Guevara

You will never know how much it has cost my generation to preserve your freedom. I hope you will make good use of it. – John Adams

All the great things are simple, and many can be expressed in a single word: freedom, justice, honor, duty, mercy, hope. – Winston Churchill 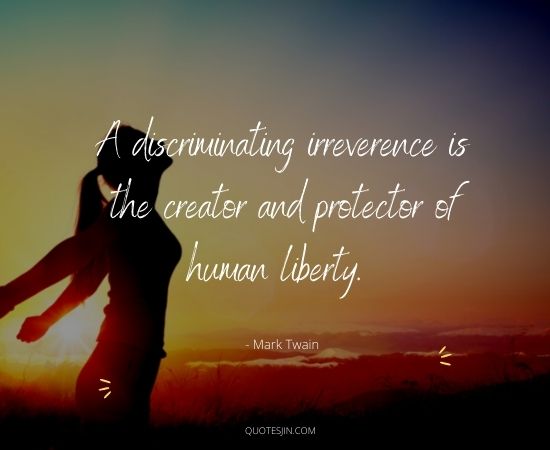 A discriminating irreverence is the creator and protector of human liberty. – Mark Twain

My definition of a free society is a society where it is safe to be unpopular. – Adlai Stevenson

Every human has four endowments – self-awareness, conscience, independent will, and creative imagination. These give us the ultimate human freedom… The power to choose, to respond, to change. – Stephen Covey

When freedom does not have a purpose, when it does not wish to know anything about the rule of law engraved in the hearts of men and women, when it does not listen to the voice of conscience, it turns against humanity and society. – Pope John Paul II

Let every nation know, whether it wishes us well or ill, that we shall pay any price, bear any burden, meet any hardship, support any friend, oppose any foe to assure the survival and the success of liberty. – John F. Kennedy

Certainly one of the chief guarantees of freedom under any government, no matter how popular and respected, is the right of citizens to keep and bear arms. – Hubert H. Humphrey