Here are some inspiring forgiveness quotes to help you if you’re struggling with forgiving someone. Forgiveness is a powerful act. It can free us from the weight of resentment and anger, and bring us peace.

Forgiveness comes in many forms. It can be given to yourself, or to another person. It can be granted for a single act, or for a lifetime of wrongs. There is no one right way to forgive, and no one size fits all approach.

Whatever approach you choose, forgiveness is an important step on the road to healing and peace. It allows you to let go of negative feelings and resentment, and move on with your life.

Sometimes it doesn’t happen overnight. In these moments, it can be helpful to remind ourselves of the benefits of forgiveness. Below in this article you can find some best collections of quotes about forgiveness to keep you motivated! 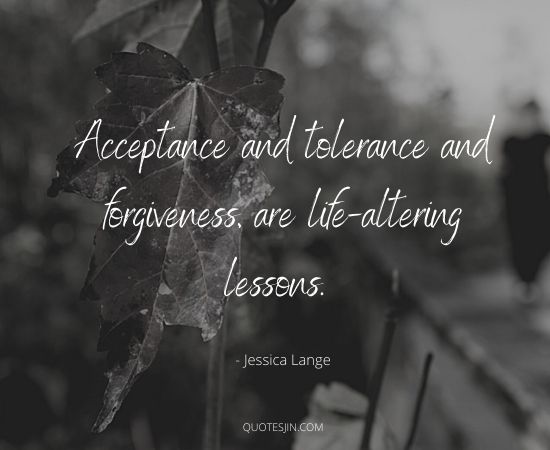 Acceptance and tolerance and forgiveness, are life-altering lessons. – Jessica Lange 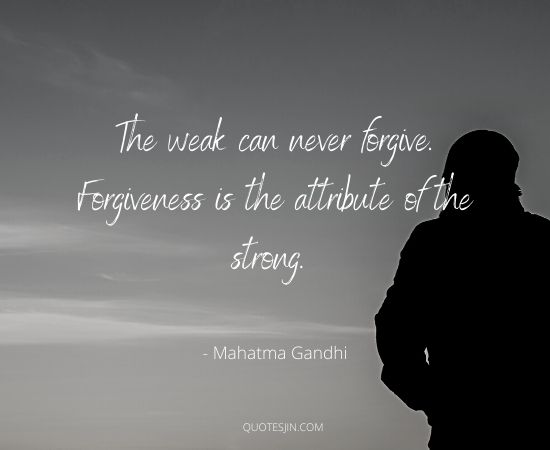 The weak can never forgive. Forgiveness is the attribute of the strong. – Mahatma Gandhi 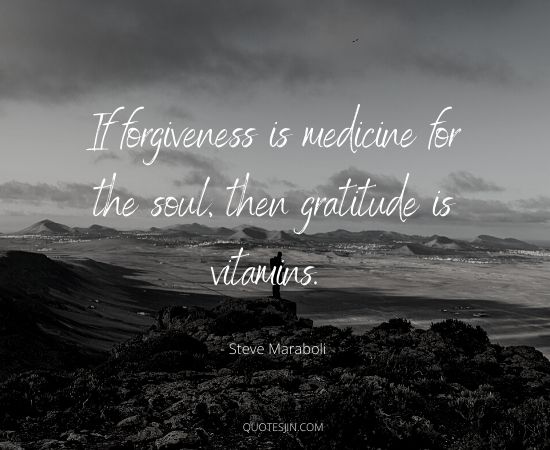 If forgiveness is medicine for the soul, then gratitude is vitamins. – Steve Maraboli 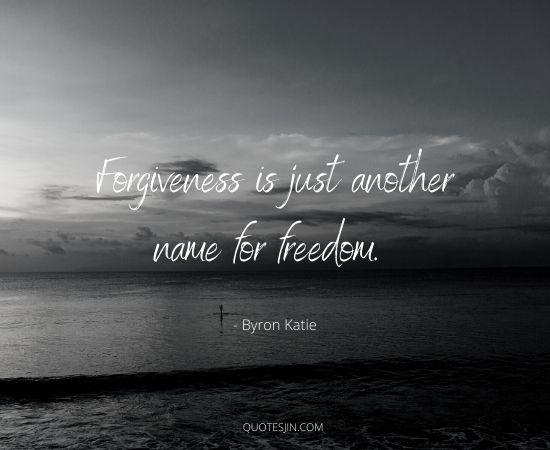 Forgiveness is just another name for freedom. – Byron Katie 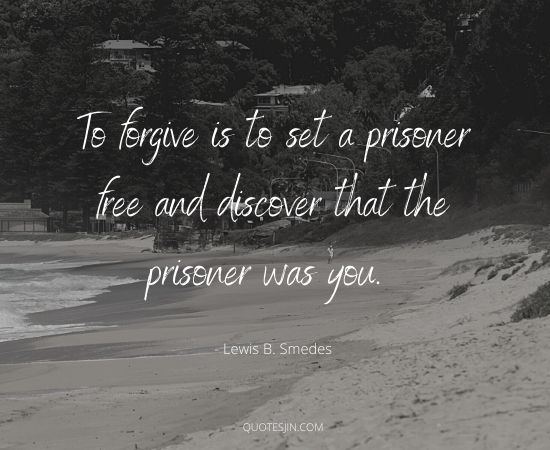 To forgive is to set a prisoner free and discover that the prisoner was you. – Lewis B. Smedes 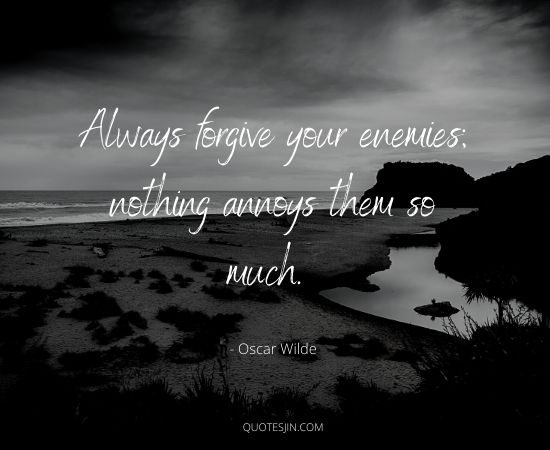 Always forgive your enemies; nothing annoys them so much. – Oscar Wilde 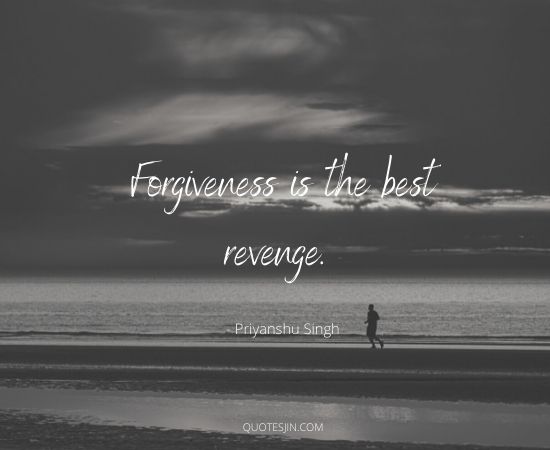 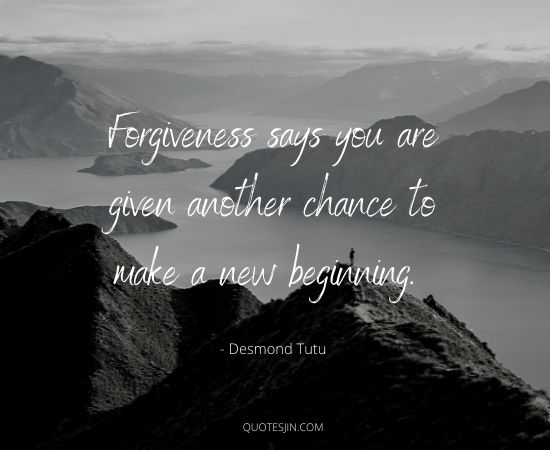 Forgiveness says you are given another chance to make a new beginning. – Desmond Tutu 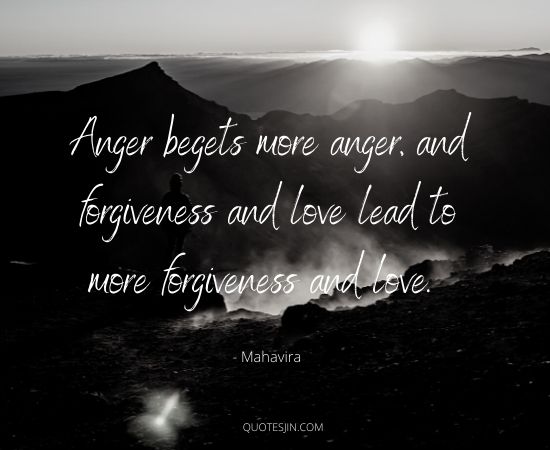 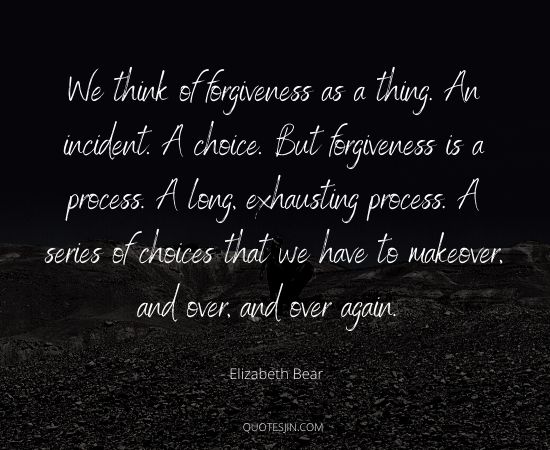 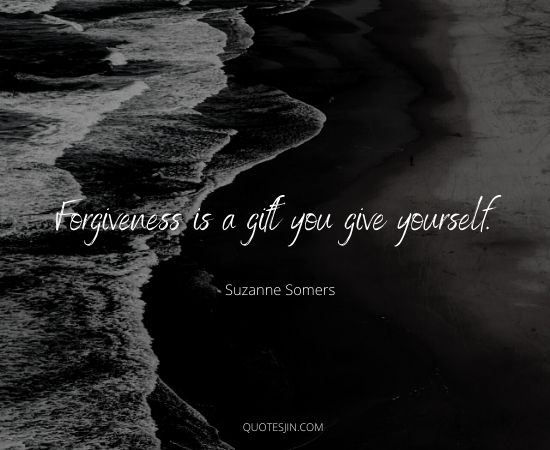 Forgiveness is a gift you give yourself. – Suzanne Somers 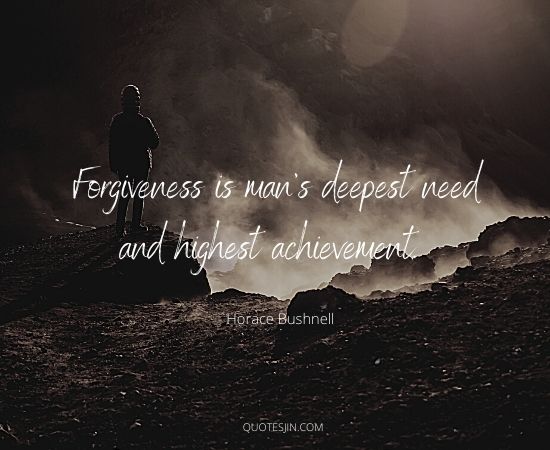 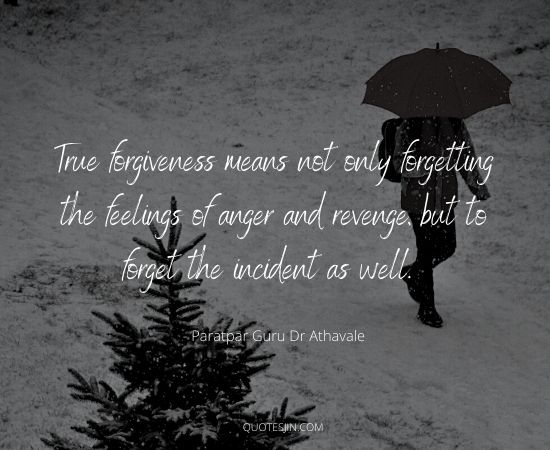 True forgiveness means not only forgetting the feelings of anger and revenge, but to forget the incident as well. – Paratpar Guru Dr Athavale 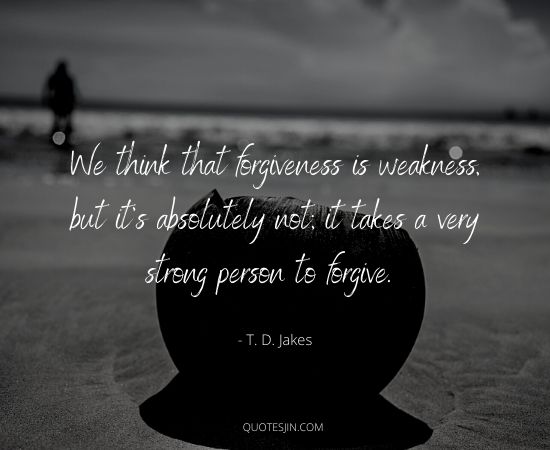 We think that forgiveness is weakness, but it’s absolutely not; it takes a very strong person to forgive. – T. D. Jakes 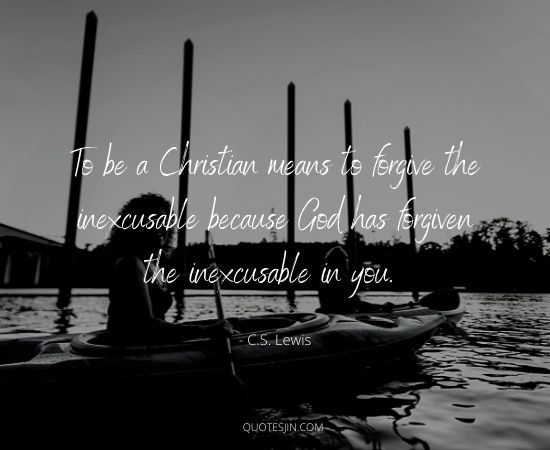 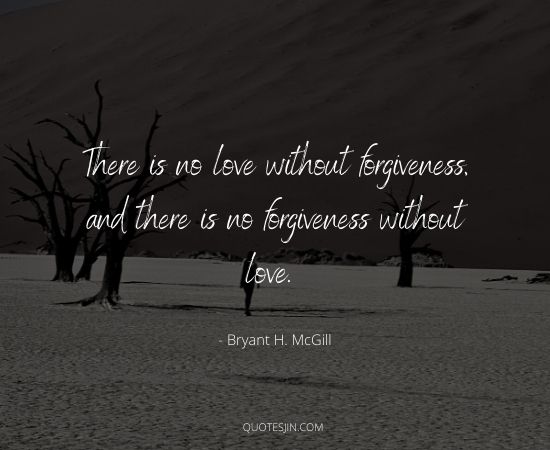 True forgiveness is when you can say, “Thank you for that experience. – Orpah

Forgiveness is the fragrance that the violet sheds on the heel that has crushed it. – Mark Twain

God forgets your confessed sins; so should you. – Woodrow Kroll

The weak can never forgive forgiveness is the attribute of the strong. 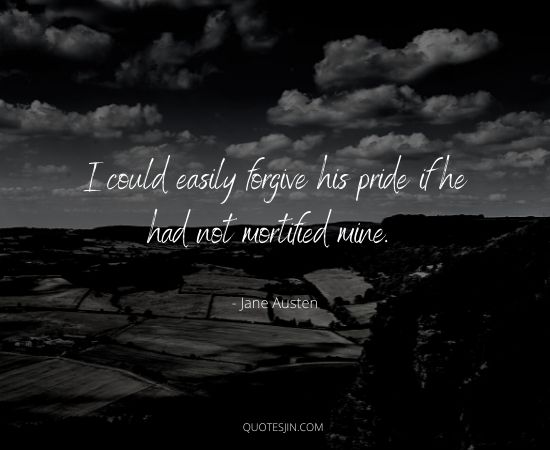 I could easily forgive his pride if he had not mortified mine. – Jane Austen

The lesson is that you can still make mistakes and be forgiven. Robert Downey

Like most youths, he indulged in elaborate daydreams of revenge, triumph, and final magnanimous forgiveness. – Unknown

A noble spirit finds a cure for injustice in forgetting it. – Publius Syrus

To forgive is to set a prisoner free and discover that the prisoner was you. – Lewis B. Smedes

To err is human, to forgive, divine. – Alexander Pope

Never forget the three powerful resources you always have available to you: love, prayer, and forgiveness.

Forgiveness is not always easy. At times, it feels more painful than the wound we suffered, to forgive the one that inflicted it. And yet, there is no peace without forgiveness. – Marianne Williamson

The stupid neither forgive nor forget; the naive forgive and forget; the wise forgive but do not forget. – Thomas Szasz

Most Famous Quotes About Forgiveness 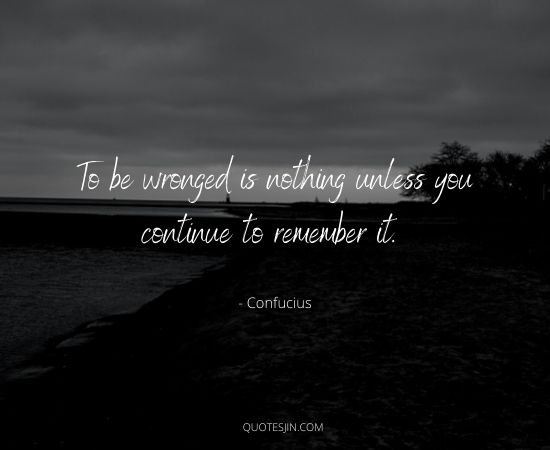 To be wronged is nothing unless you continue to remember it. – Confucius

Forgive, forget. Bear with the faults of others as you would have them bear with yours. – Phillips Brooks

One of the keys to happiness is a bad memory. – Rita Mae Brown

The simple truth is, we all make mistakes, and we all need forgiveness. – Desmond Tutu

Forgiveness does not change the past, but it does enlarge the future. – Paul Boose

God may forgive your sins, but your nervous system won’t. – Alfred Korzybski

Forgiveness is a funny thing. It warms the heart and cools the sting. – William Arthur Ward

The act of forgiveness takes place in our own mind. It really has nothing to do with the other person. – Louise Hay 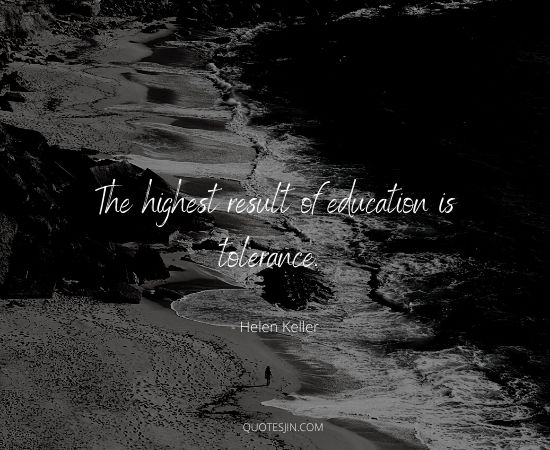 The highest result of education is tolerance. – Helen Keller

When a deep injury is done us, we never recover until we forgive. – Alan Paton

To forgive is the highest, most beautiful form of love. In return, you will receive untold peace and happiness. – Robert Muller

I will permit no man to narrow and degrade my soul by making me hate him. – Booker T. Washington

We ask for forgiveness. And we forgive others who ask us. In that way we can experience healing, healing in our souls. – Ed Dobsons

Jesus says that those who live by God’s forgiveness must imitate it. A person whose only hope is that God will not hold his faults against him forfeits his right to hold others’ faults against them. – Dr. David Jeremiah 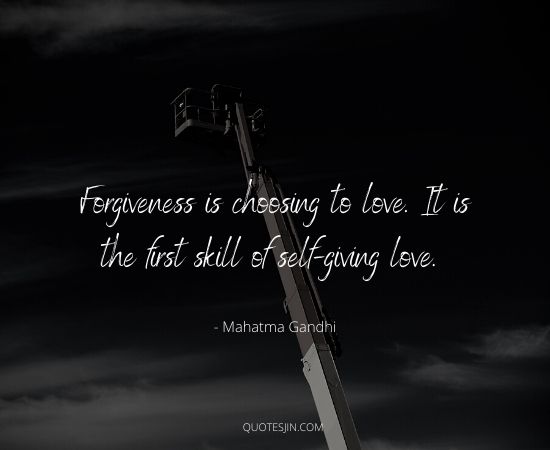 Forgiveness is choosing to love. It is the first skill of self-giving love. – Mahatma Gandhi

You’ll never know how strong your heart is until you learn to forgive who broke it.

Forgiveness will help you more than the person you forgive. – Catherine Pulsifer

It takes a strong person to say sorry, and an even stronger person to forgive.

Let us forgive each other – only then will we live in peace. – Leo Nikolaevich Tolstoy

Before we can forgive one another, we have to understand one another. – Emma Goldman

Forgiveness is not an occasional act; it is a permanent attitude. – Martin Luther King Jr

Asking for and receiving forgiveness from another person takes courage. – Jan Dargatz 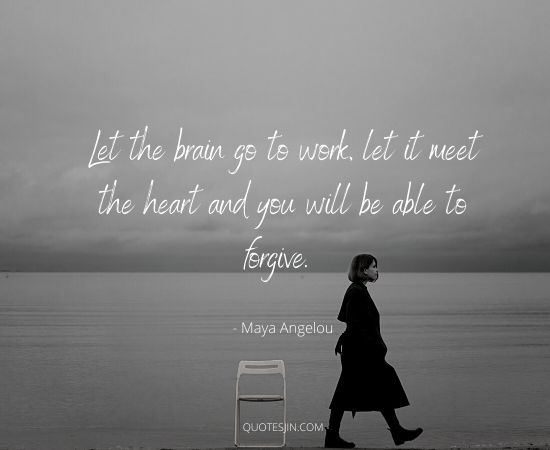 Let the brain go to work, let it meet the heart and you will be able to forgive. – Maya Angelou

Forgive others as quickly as you expect God to forgive you.

Forgiveness isn’t approving what happened. It’s choosing to rise above it.

One of the most courageous decisions you’ll ever make is to finally let go of what is hurting your heart and soul.

Happiness is impossible without repentance, forgiveness, and a right relationship with Christ. – Randy Alcorn

Once a woman has forgiven her man, she must not reheat his sins for breakfast. – Marlene Dietrich

We must learn to forgive the ones we love and we can practice love only when we have forgiven. – Jaspinder Grover 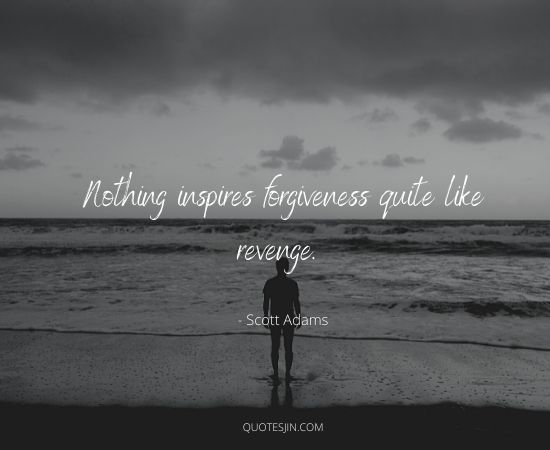 Forgiveness is the key to action and freedom. – Hannah Arendt

God forgive you, but I never can. – Elizabeth

Forgiveness is a virtue of the brave. – Indira Gandhi

Forgiveness is the needle that knows how to mend. – Jewel

One forgives to the degree that one loves. – Francois de La Rochefoucauld

Forgive and it relieves you. – Maya Angelou

My desire is to be a forgiving, non-judgmental person. – Janine Turner

There is no revenge so complete as forgiveness. – Josh Billings 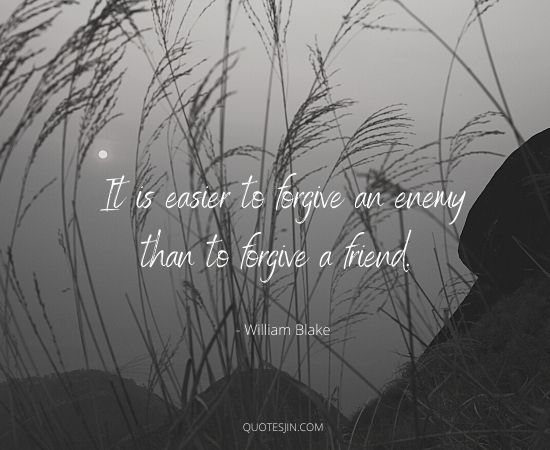 I never forgive, but I always forget. – Arthur Balfour

Those who understand evil pardon it. – George Bernard Shaw

Forgive many things in others; nothing in yourself. – Ausonius

Forgiveness is the final form of love. – Reinhold Niebuhr

What I cannot love, I overlook. – Anais Nin

I can have peace of mind only when I forgive rather than judge. – Gerald Jampolsky

It is often easier to ask for forgiveness than to ask for permission. – Grace Hopper

Mistakes are always forgivable if one has the courage to admit them. – Bruce Lee

Forgiveness is the giving, and so the receiving, of life. – George MacDonald

The ability to forgive is one of man’s greatest achievements. – Bryant H. McGill 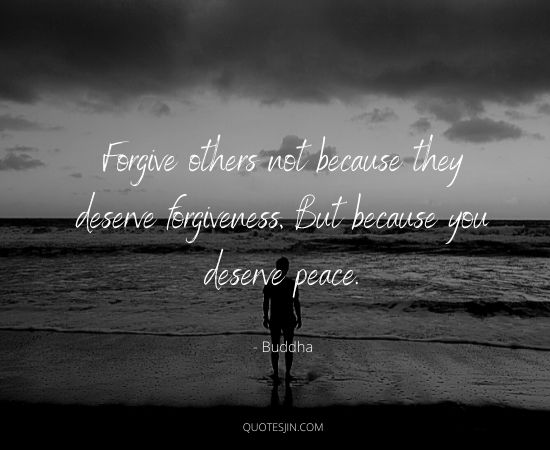 Forgive others not because they deserve forgiveness, But because you deserve peace.

Better than a thousand hollow words, is one word that brings peace.

To understand everything is to forgive everything.

Read More: Be Yourself Quotes

Those who are free of resentful thoughts surely find peace.

Peace comes from within. Do not seek it without.

The way is not in the sky. The way is in the heart.

Do not dwell in the past; do not dream of the future; concentrate the mind on the present moment.

Do not overrate what you have received, nor envy others. He who envies others does not obtain peace of mind.

Holding on to anger is like grasping a hot coal with the intent of throwing it at someone else; you are the one who gets burned.

All major religious traditions carry basically the same message; that is love, compassion and forgiveness the important thing is they should be part of our daily lives.

By three things the wise person may be known. What three? He sees a shortcoming as it is. When he sees it, he tries to correct it. And when another acknowledges a shortcoming, the wise one forgive it as he should.

There is nothing more dreadful than the habit of doubt. Doubt separates people. It is a poison that disintegrates friendships and breaks up pleasant relations, it is a thorn that irritates and hurts; it is a sword that kills.

When someone does something that hurts you, it’s natural to have negative feelings. To get rid of those feelings, you need to forgive that person and let go of the negative emotions. Forgiveness doesn’t mean that you’re condoning the person’s actions. It doesn’t mean that you’re saying what they did was okay. Forgiveness is about releasing the anger, hatred, and resentment you feel.

1 thought on “180 Forgiveness Quotes to Help You Move On”