Cool quotes are what you say when you want to tell someone that they are so cool, or that they did something cool. The word “cool” can be used in many different ways. Sometimes, people might not know exactly what the word means, but it will give them an idea of how they should act or what to think. Coolness quotes are usually meant to encourage people and give them hope for the future. Here are some examples of coolness quotes. 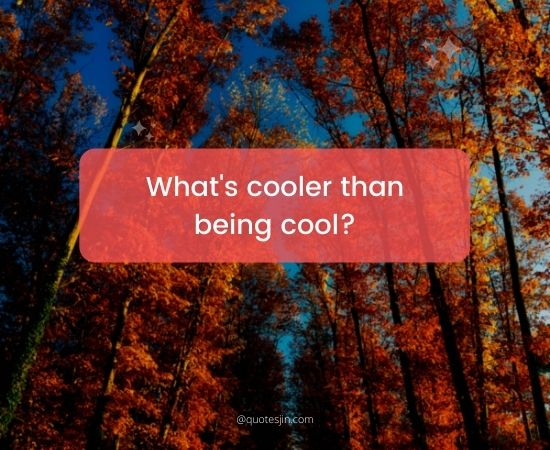 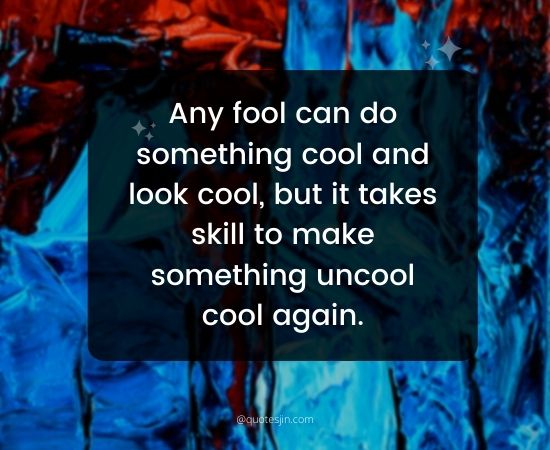 Any fool can do something cool and look cool, but it takes skill to make something uncool cool again.
– Criss Jami 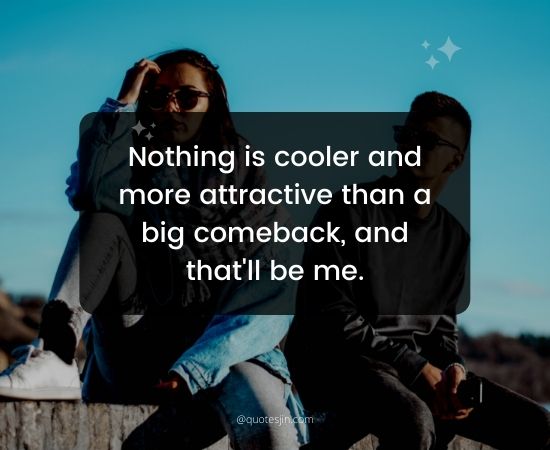 Nothing is cooler and more attractive than a big comeback, and that’ll be me.
– Steven Adler 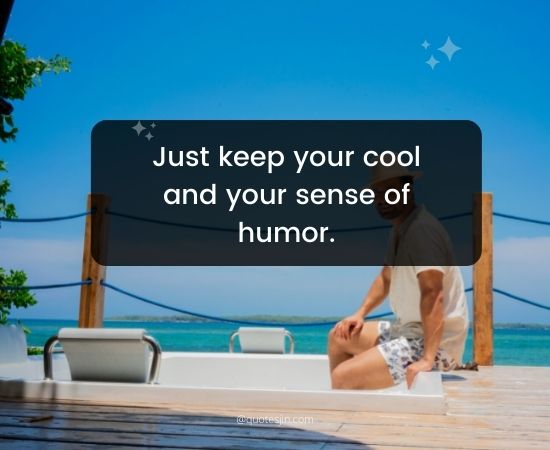 Just keep your cool and your sense of humor.
– Smiley Blanton 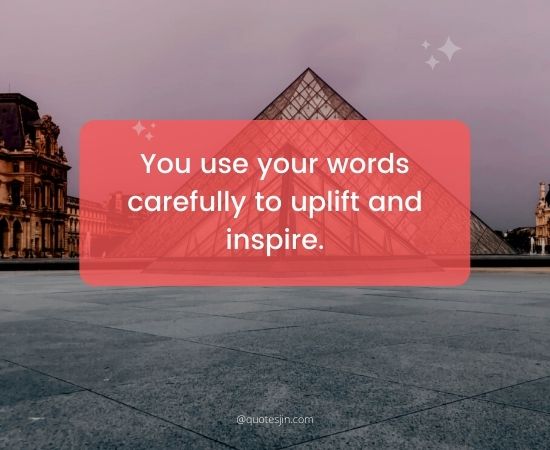 You use your words carefully to uplift and inspire.
– Robin Roberts 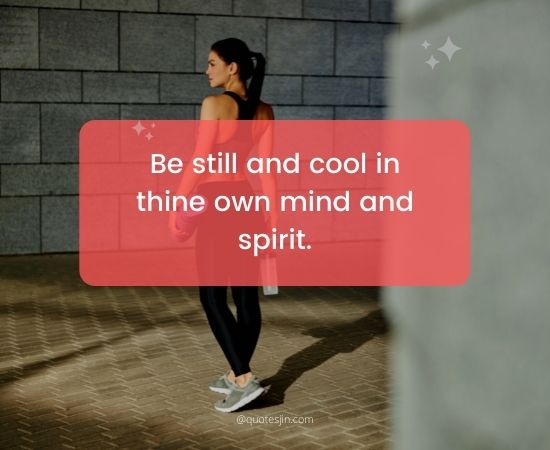 Be still and cool in thine own mind and spirit.
– George Fox 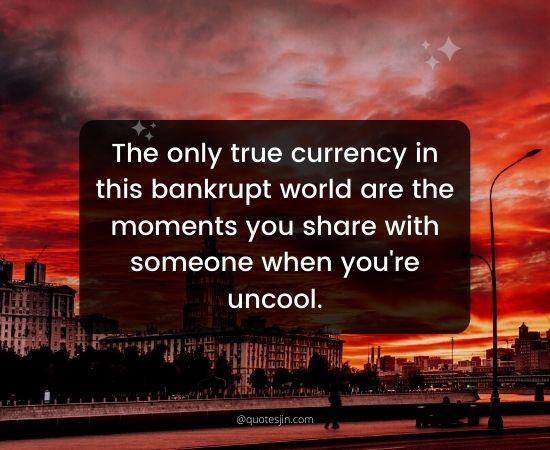 The only true currency in this bankrupt world are the moments you share with someone when you’re uncool.
– Cameron Crowe 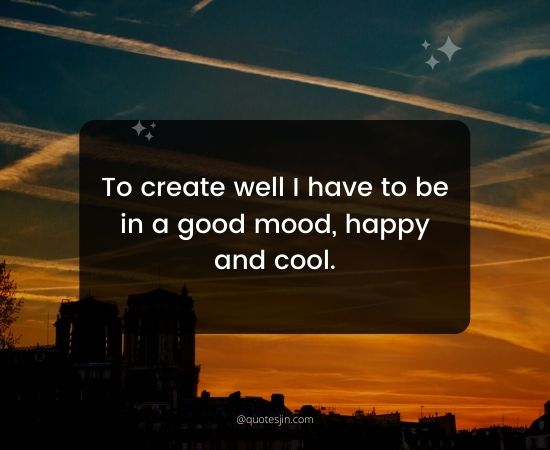 To create well I have to be in a good mood, happy and cool.
– Marc Newson 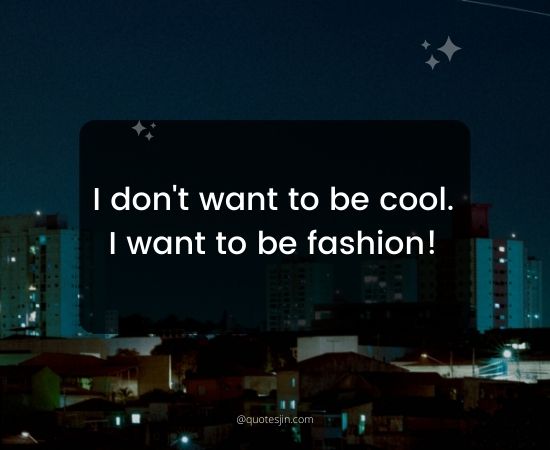 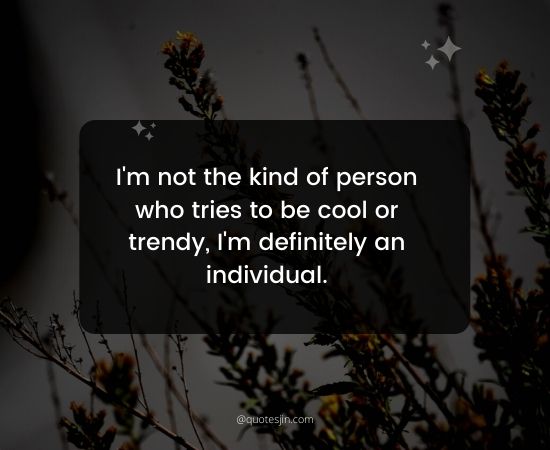 I’m not the kind of person who tries to be cool or trendy, I’m definitely an individual.
– Leonardo DiCaprio 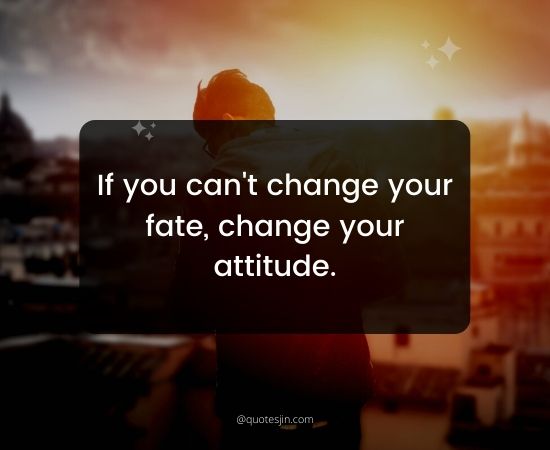 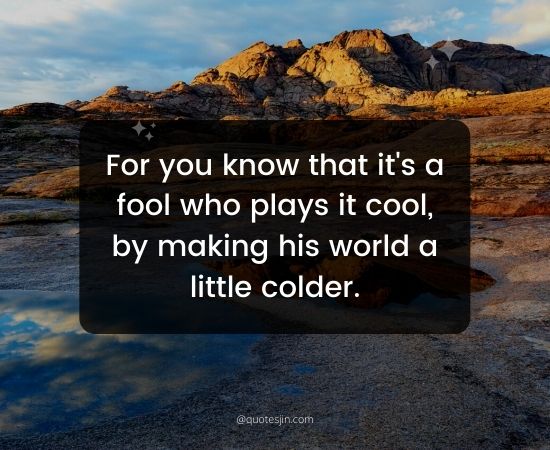 For you know that it’s a fool who plays it cool, by making his world a little colder.
– Paul McCartney 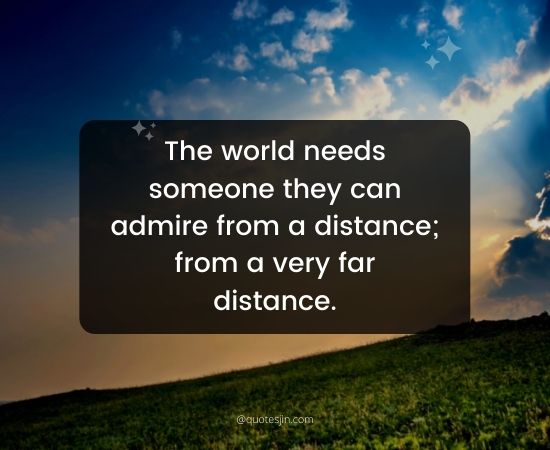 The world needs someone they can admire from a distance; from a very far distance.
– Michael Bassey Johnson 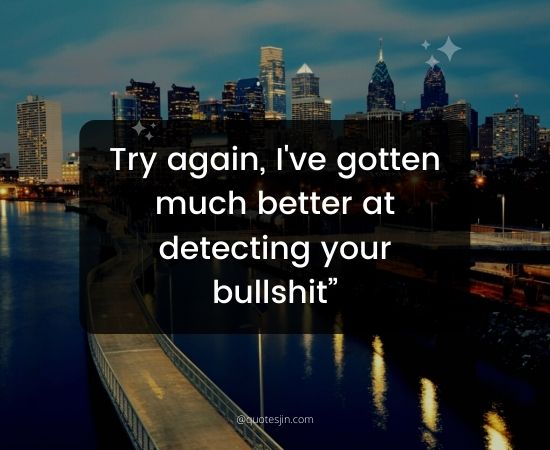 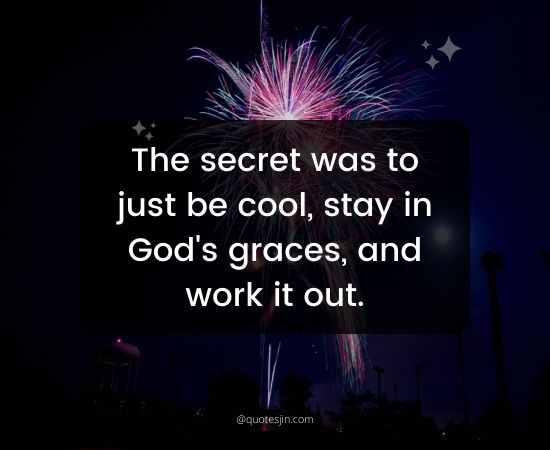 The secret was to just be cool, stay in God’s graces, and work it out.
– Solomon Burke 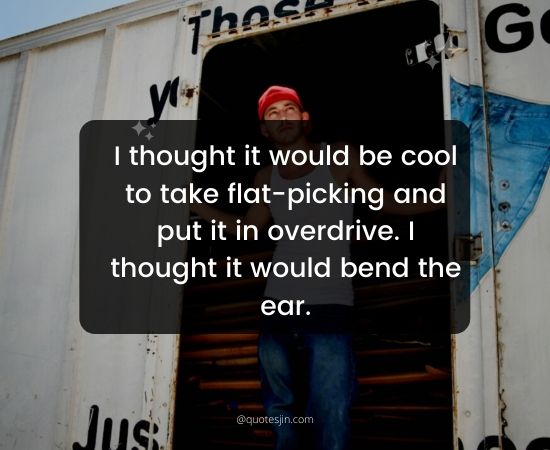 I’m cool with failing so long as I know that there are people around me that love me unconditionally.
– Dave Chappelle 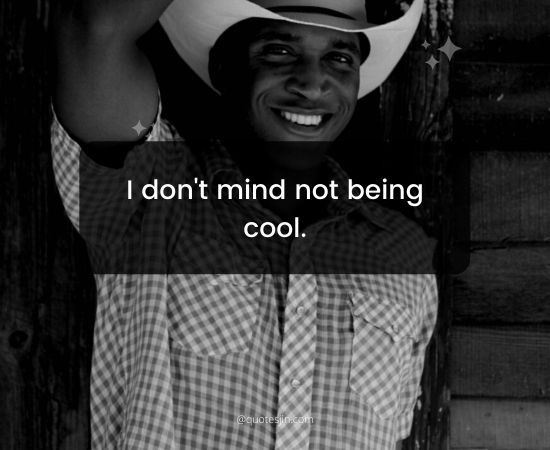 I don’t mind not being cool.
– Chris Martin

Being cool is being your own self, not doing something that someone else is telling you to do.
– Vanessa Hudgens

Let your soul stand cool and composed before a million universes.
– Walt Whitman

I can take it. The tougher it gets, the cooler I get.
– Richard M. Nixon

The coolest thing is when you don’t care about being cool.
– Rick Owens

Animals are such agreeable friends – they ask no questions; they pass no criticisms.
– Unknown

I can take it. The tougher it gets, the cooler I get.
– Richard Nixon

I think you create your own hipness.
– Peabo Bryson

I’m so cool that the kids come to my bedroom and go, ‘Mom! Turn the music down!”
– Melissa Etheridge

Keep a cool head and maintain a low profile. Never take the lead – but aim to do something big.
– Deng Xiaoping

Whatever hysteria exists is inflamed by mystery, suspicion and secrecy. Hard and exact facts will cool it.
– Elia Kazan

Our imagination is the only limit to what we can hope to have in the future.
– Charles Kettering

Those who think it is not cool to be kind are cold hearted.
– Catherine Pulsifer

Welcome to the new age. The greatest age in history. The Technology Age.
– Jake Jake Jake

I don’t need to hang out in a posse and try to act cool.
– Jeremy London

I don’t mind not being cool; I wear a cardigan.
– Marcus Brigstocke

I want to be a vampire. They’re the coolest monsters.
– Gerard Way

If you’ve gotta think about being cool, you ain’t cool.
– Keith Richards

We can’t arrange gods by coolness. That would lead to too many fights.
– Rick Riordan

Rather be dead than cool.
– Kurt Cobain

Yet you can’t learn to be cool, it’s more a personality trait.
– Joeri Van Den Bergh

Fashion is simply a guideline for style-less people to appear stylish.
– Criss Jami

If you think you’re not cool enough, you will never be cool enough.
– Romy Miller

Well you, young man, need to learn about what is much more important than cool. And that is: what is beautiful.
– John Butler

Be cool to the pizza dude.
– Steele Stanwick

Being uncool is being pretty much the coolest you can be.
– Rufus Wainwright

Yoga will always be transformational, even when it stops being cool.
– Victoria Moran

Sometimes one day changes everything; sometimes years change nothing.
– Unknown

You need to understand something that will liberate your life: You don’t need other people’s approval to be happy.
– Rick Warren

That was the peak. I just knew it was modern, not traditional culture. I could be cool.
– Li Peng

All of my favorite people – people I really trust – none of them were cool in their younger years.
– Taylor Swift

Confidence is contagious and so is lack of confidence.
– Vince Lombardi

If you really want something, you can figure out how to make it happen.
– Cher

That which is cool is driven by the soul.
– Adrienne Posey

I never saw music in terms of men and women or black and white. There was just cool and uncool.
– Bonnie Raitt

What’ s the matter with me? Why can’t I be cool?
– Woody Allen

Women are like teabags. We don’t know our true strength until we are in hot water!
– Eleanor Roosevelt

People look at me and see a calm, cool guy on the sidelines and I want them to know that my Christian faith affects my coaching and everything I do.
– Tony Dungy

Govern a family as you would cook a small fish – very gently.
– Chinese Proverbs

I’ve never done anything because I thought it would look cool.
– John Mayer

Its going to be interesting to see how society deals with artificial intelligence, but it will definitely be cool.
– Colin Angle

One cool judgment is worth a thousand hasty counsels. The thing to do is to supply light and not heat.
– Woodrow Wilson

Sometimes life’s so much cooler when you just don’t know any better and all the painful lessons have not hammered your head open yet.
– Anthony Kiedis

It’s so important to realize that every time you get upset, it drains your emotional energy. Losing your cool makes you tired. Getting angry a lot messes with your health.
– Joyce Meyer

From a distance, he looks like the coolest of dudes. He even gives the impression that he’d be doing you a favor if you pulled over and picked him up.
– William Loizeaux

Quotes and Sayings About Being Cool

The stars are a free show; it don’t cost anything to use your eyes.
– George Orwell

Luck is a dividend of sweat. The more you sweat, the luckier you get.
– Ray Kroc

The only real mistake is the one from which we learn nothing.
– Henry Ford

If you think you can kind of chill out, start coasting; look, you are sadly mistaken.
– Eric Thomas

When fate hands us a lemon, let’s try to make lemonade.
– Dale Carnegie

Your character defines who you are by the actions you take.
– Catherine Pulsifer

The nerds are the ones that make the films and do loads of other really cool stuff in their life.
– Daniel Radcliffe

Saturday morning, you knew what was cool by what was on ‘Soul Train.’
– Nick Cannon

The difference between greatness and mediocrity is often how an individual views a mistake.
– Nelson Boswell

If you run out of ideas follow the road; you’ll get there.
– Edgar Allan Poe

Personal beauty is a greater recommendation than any letter of reference.
– Aristotle

Cheer up, keep your spirits high, things are bound to get better!
– Anne Frank

The purpose of art is washing the dust of daily life off our souls.
– Pablo Picasso

Effort only fully releases its reward after a person refuses to quit.
– Napoleon Hill

Self control refers to controlling one’s emotions and feelings and not losing one’s cool even in the worst of situations.
– Brian Adams

You don’t have to be the biggest, the richest, the most famous, the coolest, the fastest, the most intelligent to stand out – you’ve just got to be different.
– Jeff Paul Smith

Your sacred space is where you can find yourself again and again.
Joseph Campbell

The noble-minded are calm and steady. Little people are forever fussing and fretting.
– Confucius

Empty pockets never held anyone back. Only empty heads and empty hearts can do that.
– Norman Vincent Peale

It seems like once people grow up, they have no idea what’s cool.
– Bill Watterson

I’m a geeky toy collector, and to have toys of your own characters is unbelievably cool.
– Craig McCracken

I just tried to keep my cool and continue with my race plan: to win.
– Mark Spitz

You cannot change the world, But you can present the world with one improved person – Yourself.
– Brian Tracy

The secret of your success is determined by your daily agenda. It all comes down to what you do today.
– John C. Maxwell

For the last few years, it’s been so chic for everybody to be miserable. Like if you’re in with the cool crowd, you can’t be happy.
– Lenny Kravitz

My key to dealing with stress is simple: just stay cool and stay focused.
– Ashton Eaton

Never give up. When your heart becomes tired, just walk with your legs – but move on.
– Paulo Coelho

Every collection that I work on, I always think, Is this cool enough to wear to a concert?
– Anna Sui

I think you have to be cool to be a good flirt, and I don’t think I’m very cool.
– Harry Styles

A coach is someone who can give correction without causing resentment.
– John Wooden

If you reach for a star, you might not get one. But you won’t come up with a hand full of mud either.
– Leo Burnett

It’s not what you’ve got, it’s what you use, that makes a difference in how your life turns out.
– Zig Ziglar

It’s cool just because I’ve had this dream of changing the sport of swimming and it’s finally happening.
– Michael Phelps

Our western European thought of retirement and pension has to be broken against all odds. Because it is a false myth that happiness comes from 65 years ‘retires’.
– Ben Friedland