Best anime quotes can brighten up any moment because Anime is an interesting genre of film that has a large following. It is full of action and adventure, with colorful characters and worlds that are full of life.

One aspect of anime that often separates it from other genres is dialogue. The lines spoken by the characters are often very memorable and describe the anime perfectly.

So if you’re looking for an anime quote that describes the show or movie perfectly. Then this article contains the best lines from famous anime that perfectly describe the show. 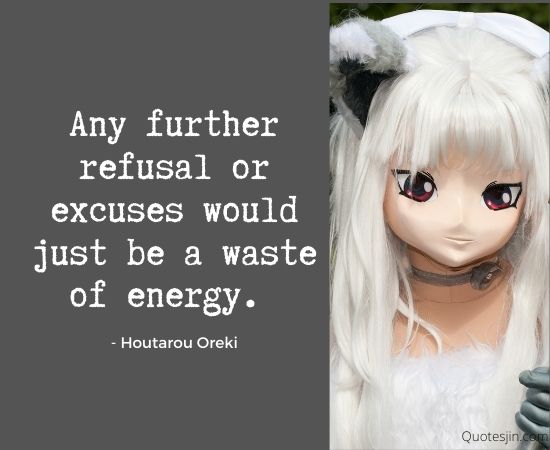 Any further refusal or excuses would just be a waste of energy. – Houtarou Oreki

The sound soul…resides within the sound mind, and the sound body. – Maka Albarn

No matter how we close our eyes, there’s a whole world out there bigger than ourselves and our dreams… – Edward Elric 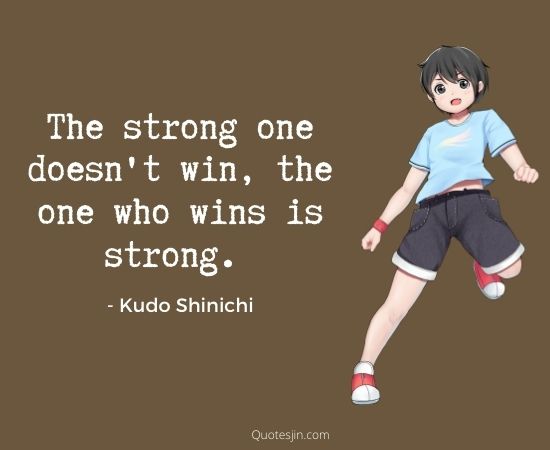 The strong one doesn’t win, the one who wins is strong. – Kudo Shinichi

I’ll stop it. Even if by body crumbles I’ll stop it with my soul. – Natsu

When you realize something important, why’s it already gone? – Anri Sonohara

It’s better to see something for yourself than hear about it. – Riko Aida

But the stronger the light, the darker the shadow, and the more it accentuates the brightness of the light. – Tetsuya

People don’t always want to do what they are good at. – Koichi Azuma

Choosing your calling based solely on your talents won’t always guarantee you happiness. – Natalia Kaminski

True friends are like innate quotient. It’s not something that people can simply ask for. I’d suggest you treasure it. – Hunter x Hunter

I have no regrets, this is the only path. – Shiro Emiya

My life is mine! They can’t have it! – Mary Saotome

It’s spring outside, but in my heart it’s winter. – Sakuragi Hanamichi

False tears bring pain to others. A false smile brings pain to yourself. – C.C.

We’d rather die than sell out our friends! – Erza

Stellar Spirits are not Shields. – Lucy

The only one who can beat me is me. – Daiki Aomine

We are Fairy Tail! – Makarov

Even if God and the devils forgive them, I never will. – Nacht Faust

Do you know where hell is? Inside your head. – Chrona

Hurt me with the truth. But never comfort me with a lie. – Erza Scarlet

Crap! i forgot to wear my clothes!! – Gray

I don’t want to regret anything because of the way I lived. – Yuji Itadori

It wasn’t me who was wrong, it was the world. – Lelouch Vi Britannia

When you give up, that’s when the game ends. – Mitsuyoshi Anzai

To make your ambitions come true, you have to take risks. – Yumeko Jabami

Don’t you think that if you keep lying, eventually no one, not even yourself, will be able to believe your own words? – Aladdin

I want to know what “I love you” means… – Violet Evergarden

Forgetting is like a wound. The wound may heal, but it has already left a scar. – Monkey D. Luffy

A good book is always good, no matter how many times you’ve already read it. – Osamu Dazai

It doesn’t matter who they are, I won’t forgive anyone who tries to stand out more than me. – Black Star

I’m gonna destroy them! Every last one of those animals that’s on this earth! – Eren Yeager

If you pick a fight with a god of death, I can’t guarantee your soul’s safety.

Every living human being is a slave to something. – Askeladd

I’m going to use the power of science to save every single person. – Senku Ishigami

Fools who don’t respect the past are likely to repeat it. – Nico Robin

If you don’t take risks, you can’t create a future! – Monkey D. Luffy

No single thing is perfect by itself. That’s why we’re born to attract other things to make up for what we lack. I think we start walking in the right direction only after we start getting our counterparts besides us. – Itachi Uchiha

Vision is not what your eyes see, but an image that your brain comprehends. – Touko Aozaki

The ticket to the future is always open. – Vash The Stampede

Don’t stop here, this is but a line of text that’s not worth reading. – Dragon Ball Z

If you just submit yourself to fate, then that’s the end of it. – Keiichi Maebara

No matter how hard or impossible it is, never lose sight of your goal. – Monkey D Luffy

It is at the moment of death that humanity has value. – Archer

An excellent leader must be passionate because it’s their duty to keep everyone moving forward. – Nico Yazawa

People, who can’t throw something important away, can never hope to change anything. – Armin Arlert

Sometimes I do feel like I’m a failure. Like there’s no hope for me. But even so, I’m not gonna give up. Ever! – Izuku Midoriya

The moment you think of giving up, think of the reason why you held on so long. – Natsu Dragneel

Life comes at a cost. Wouldn’t it be arrogant to die before you’ve repaid that debt? – Yuuji Kazami

Hard work is worthless for those that don’t believe in themselves. – Naruto Uzumaki

You should never give up on life, no matter how you feel. No matter how badly you want to give up. – Canaan

When you lose sight of your path, listen for the destination in your heart. – Allen Walker

A place where someone still thinks about you is a place you can call home. – Jiraiya

Thinking you’re no-good and worthless is the worst thing you can do. – Nobito

Every journey begins with a single step. We just have to have patience. – Milly Thompson

If nobody cares to accept you and wants you in this world, accept yourself and you will see that you don’t need them and their selfish ideas. – Alibaba Saluja

The sea is for pirates to fight on! – Monkey D. Luffy

If you misuse a power that’s all too great, you will only destroy yourself. – Reigen Arataka

I have no right to call myself a hero, at all… Even so, there’s no way I can back down. – Tenya Iida

Give up on your dreams and die! – Levi Ackerman

When You Die, I’ll Be The One Writing Your Name In My Death Note. – Ryuk

People die if they are killed. – Emiya Shirou

Whatever you lose, you’ll find it again. But what you throw away you’ll never get back. – Himura Kenshin

If you don’t like your destiny, don’t accept it. – Naruto Uzumaki

The weak are destined to lie beneath the boots of the strong. If that angers you, overcome your deficits. – Unknown

I want you to be happy, I want you to laugh a lot, I don’t know what exactly I’ll be able to do for you, but I’ll always be by your side. – Kagome Higurashi

If you’ve got time to point fingers, then how about using your head to figure out what you want to do about it? – Karma Akabane

You said that despair is as contagious as any disease. But the same is true of hope. All you have to do is look at us to see how true that is. – Kyoko Kirigiri

Don’t beg for things, do it yourself or else you won’t get anything. – Renton Truston, Eureka

Humankind cannot gain anything without first giving something in return. To obtain, something of equal value must be lost. – Alphonse Elric

People’s lives don’t end when they die, it ends when they lose faith. – Naruto

All we can do is live until the day we die. Control what we can…and fly free. – Deneil Young

People become stronger because they have memories they can’t forget. – Tsunade

It doesn’t do any good to pretend you can’t see what’s going on. – Yuuya Mochizuki

If you can’t find a reason to fight, then you shouldn’t be fighting. – Akame

A dropout will beat a genius through hard work. – Rock Le

We can’t waste time worrying about the what if’s. – Ichigo Kurosaki

That’s why I can’t make a change. Everything I do is so… Half-assed. – Hiroshi Kido

It’s just pathetic to give up on something before you even give it a shot. – Reiko Mikami

Being lonely is more painful then getting hurt. – Monkey D. Luffy

There’s no shame in falling down! True shame is to not stand up again! – Shintarō Midorima

If you can’t do something, then don’t. Focus on what you can. – Shiroe

Power comes in response to a need, not a desire. You have to create that need. – Goku

Simplicity is the easiest path to true beauty. – Seishuu Handa

No matter what you have to do to survive… don’t ever give up! – Tokyo Ghoul

Whatever you do, enjoy it to the fullest. That is the secret of life. – Rider

You can’t always hold on to the things that are important. By letting them go we gain something else. – Kunio Yaobi

Don’t beg for things. Do it yourself, or else you won’t get anything. – Renton Thurston

If you really want to be strong… Stop caring about what your surrounding thinks of you! – Saitama

Why should I apologize for being a monster? Has anyone ever apologized for turning me into one? – Juuzou Suzuya

If you don’t share someone’s pain, you can never understand them. – Nagato

We don’t have to know what tomorrow holds! That’s why we can live for everything we’re worth today! – Natsu Dragneel

Anime Quotes that Inspire You to Take Action

The Anime quotes and the power of anime in life. Anime quotes serve as a source of inspiration in life. They give us the strength to take action and face the harsh realities of life.

Let us look at some examples of how anime quotes have inspired people to take action. A lot can be learned from anime quotes, they are very insightful.

Anime is not just about entertainment, but also about an important message which needs to be delivered to everyone who watches it.

Why Should You Watch Anime and What Makes it so Great?

Anime is a Japanese term that refers to all forms of animation from Japan. It’s a highly popular form of entertainment in many parts of the world.

There are many different kinds of anime that people watch for different reasons. One reason why anime is so popular is that it can be enjoyed by people from all walks of life, including kids, teenagers, and adults alike.

The number one reason why many people watch anime is that it’s entertaining and fun to watch!

I haven’t met anyone who likes motivational quotes and who doesn’t also enjoy anime. That’s why I thought it would be a good idea to collect some of my favorite anime quotes and share them with you. Anime quotes are a great way to get a little boost of motivation.